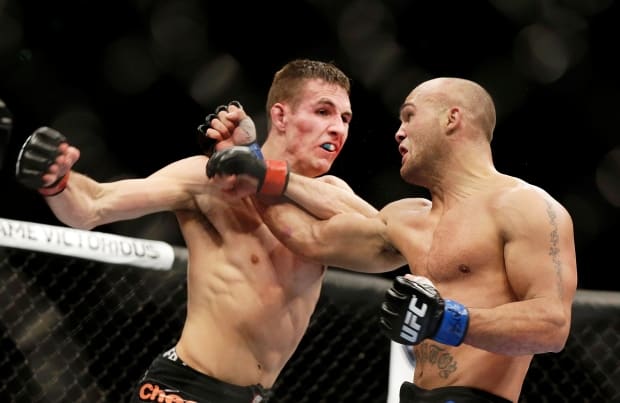 UFC welterweight champion Robbie Lawler returns to action tomorrow (Saturday July 11th, 2015) as he takes on hungry contender Rory MacDonald in the co-main event of UFC 189. The Las Vegas card will be headlined by featherweight interim rivals Conor McGregor and Chad Mendes, in a fight that has been in full focus for the entire portion of the PPV (pay-per-view) card’s hype train. ‘Ruthless’ has often opted out of the limelight when it comes to self promotion, so it’s likely that playing second fiddle in terms of placement and hype at UFC 189 means little to the travelled veteran.

‘Business as usual’ is how he describes his rematch with ‘Ares’, having already defeated the Canadian by split decision en-route to his victory over Johny Hendricks in their second meeting. Talking to MMAJunkie.com, Lawler says the plan is to get the finish this time around:

“It’s just business as usual. If I had to carry the show, I’d do that. But I’m just going go out there and be me, get in Rory’s face and get a knockout. I don’t really concentrate on the promotion as much, I’m just going to be me.”

“I respect everyone in the cage, but it’s all about me going out there and showcasing what I’m capable of and all the hard work that I’ve put in,” Lawler said. “In the last seven months I’ve grown as a fighter. I’ve continued to grow every fight and I’m going to showcase it.”

Lawler’s growth as a fighter and also as a person has been great to watch. His early years in the UFC showcased a raw and powerful talent, but often he wasn’t training right and ended up losing to fighters that are now considered much lesser foes. His UFC 167 win over MacDonald showed a much more mature version of Lawler, and he says that at age 33 his body is in prime condition:

So there you have it. ‘Ruthless’ Robbie Lawler will once again do battle with Tristar’s last hope Rory MacDonald, and a victory will likely pave the way for a third fight with his old rival ‘Bigg Rigg’. Having Conor McGregor at the top of the card has worked well for the two men in the co-main event spot, but they’ll still probably try and steal the show with a big finish to either claim or defend the welterweight strap.