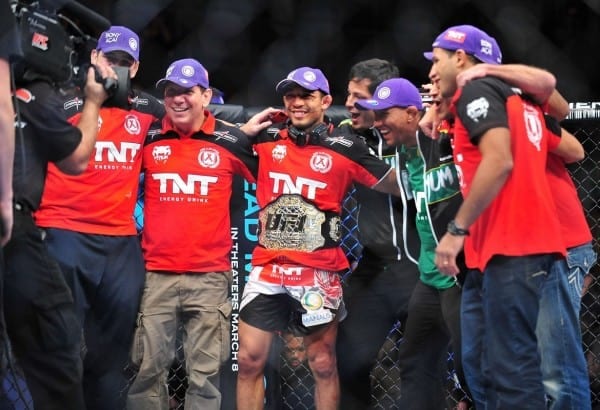 With a sizeable amount of controversy surrounding a Thursday random drug test at his Nova Uniao gym in Brazil, UFC featherweight champion Jose Aldo unfortunately finds himself at the center of a discussion that could potentially result in a miniscule shadow of doubt cast over his illustrious legacy, and, at the very most, lead to a disruption of his blockbuster UFC 189 title bout against popular Irish contender Conor McGregor.

Aldo was administered a random test two days ago by Ben Mosier, the director of the Drug Free Sport Lab who was authorized by the Nevada State Athletic Commission (NSAC) to collect an out-of-competition sample. Aldo agreed and gave his sample, but it was discarded when his trainer Andre Pederneiras questioned the legitimacy of the test, causing the Brazilian Athletic Commission for MMA (CABMMA) to get involved and eventually contact Brazilian Federal Police, who determined Mosier did not have the necessary visa required to work in Brazil.

He was issued a fine and given eight days to leave the country, and Aldo was administered a second ‘random’ test yesterday (Fri., June 12, 2015) by a licensed affiliate of the World Anti-Doping Agency (WADA) that was actually sent to the same lab that his first test was slated to go to.

Today the UFC issued an official statement on their Portuguese website detailing that they indeed knew about the situation and will stand by the only featherweight champion they’ve ever had, whom they reaffirmed had never failed a drug test. The statement also confirmed that the promotion was in full support of the NSAC’s increased efforts to root out performance-enhancing drugs (PEDs) in the sport:

“”The UFC has learned about the out-of-competition test, originally scheduled for Thursday, June 11, with Jose Aldo, by the Nevada State Athletic Commission.

Aldo has always been an exemplary athlete and a great champion for the UFC, and has proved it all this time. We affirm with authority that Aldo was made available to the test when requested by the Nevada Commission.

Andre Pederneiras, the champion’s manager and coach, then received the tester in his gym in Rio de Janeiro, on Friday, when the test was officially done.

The UFC declares unconditional support to featherweight champion Jose Aldo and reiterates its admiration for the Nevada Commission, for wanting to ensure a clean competition between athletes.”

So the UFC has voiced their unconditional support for the featherweight king, adding that he’s been nothing but an exemplary athlete the entire time he’s been under their employ. They’re going to stand by the titleholder through thick and thin in this instance. Are you?