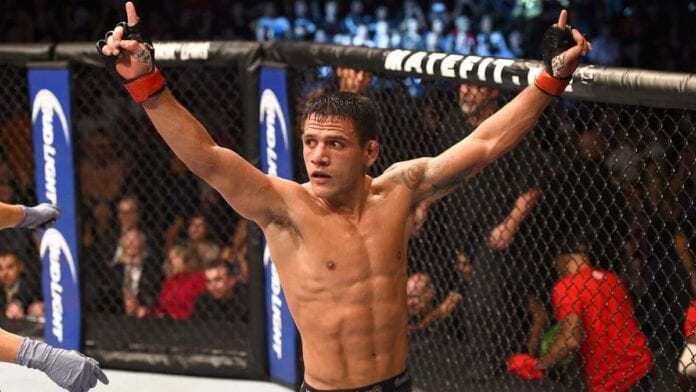 UFC lightweight champion Rafael dos Anjos continues the war of words with Conor McGregor, and he isn’t holding back….

As Rafael dos Anjos prepares to make the first defense of his lightweight title at UFC on FOX 17 against Donald Cerrone, there’s been another beef brewing between the Brazilian and Conor McGregor. ‘The Notorious’ declared it ‘red panty night’ at the Go Big presser, and since then the two have exchanged barbs over social media and it interviews, making for quite the intriguing question; Will they ever fight?

With McGregor expressing his interest in moving up to his more natural weight of 155 pounds soon, the chance of a showdown with ‘RDA’ is increased dramatically. If dos Anjos should beat ‘Cowboy’ in December, there’s a very high likelihood of the Irish star getting fast tracked through the lightweight rankings, especially with the ongoing war of words between the two.

Our good friends over at Submission Radio had the lightweight boss in studio for an interview recently, and he continued the verbal assault against the interim featherweight champ:

“Yeah man, for my whole career I always did it the hard way. You know, I never pick fights, I never…it took me 17 fights to get my title shot and it wasn’t an easy way. And I think, like McGregor when he fought Chad Mendes, I think Chad Mendes exposed him. And I think style-wise, he’s not a good fight for me, you know. I think his game, he’s a good fighter, but it’s a bad match up for him [to] fight against me.”

“If McGregor for any reason wanna come up, I would love to smash him.”

“No, actually for me, my focus right now is on Cowboy. But if Cowboy gets hurt and they replace Cowboy with McGregor, I will be happy to fight him. I’ll be happy to give him a welcome to the lightweight division. But it’s not a fight that I would prefer fighting McGregor than Cowboy.”

Another opportunity, another zinging session from the lightweight champion towards McGregor. Continuing, the subject changes to his feud with Cerrone, who is currently on an eight fight unbeaten streak since dos Anjos defeated him in 2013:

“Yeah man, this guy, I met him at UFC Fan Expo and I told him ‘hey man, we’re going to fight in December, I’m still injured,’ and he said ‘oh let’s do this in October or September’. I said ‘no man, I can’t. I’m hurt ,man. I can’t train. I’m not training’. And so two days later, one day later, he put on Twitter ‘hey Dos Anjos, let’s do it on September/October’. I just, man I talked to the guy like two days earlier than that and I told him in December. Why is he on Twitter like trying to pressure me and make me look bad for the fans and also make these accusations as well? I don’t know. I have a clean record. This guy doesn’t have a clean record. He got caught once, you know, on doing like diuretics or something. I have a clean record; I don’t make accusations. And if you don’t have a clean record, you can’t make any accusations for nobody.”

‘I got a USADA test. USADA came to my house two, three weeks ago. And man, I’m just gonna show hard work and dedication, then show the blood test. Everything I do, I’m working hard, I take my work seriously. And on December 19th, I’m gonna show that again.”

Finally Rafael dos Anjos feels he will finish the second fight with Donald Cerrone much more decisively than the last time, which was a unanimous decision. Check out the full interview after the quotes and stay tuned.

“The way that I’ve been training, I’ve been evolving a lot, improving a lot of my skills, and I don’t see this fight going five rounds. Like I said, I always go to try to finish, but sometimes you finish, sometimes not. But my intention is always to finish. I’m gonna make a prediction, maybe in the second or third round by knockout.”