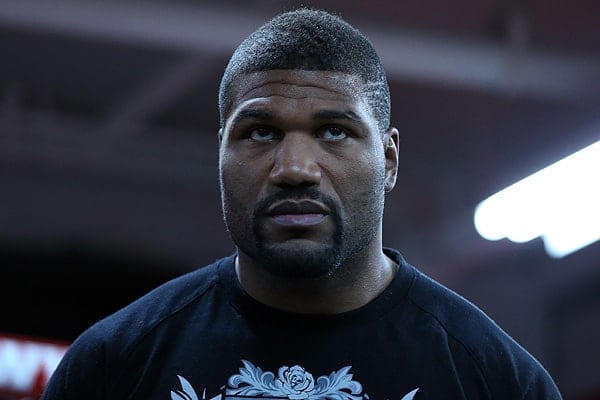 Jackson was streaming gameplay on Twitch last night and not only explained that UFC President Dana White and Zuffa co-owner Lorenzo Ferritaa told him that they would take care of his lawsuit with Bellator MMA. Also, Jackson blasted UFC middleweight Michael Bisping.

“Everybody knows I’m going through a big court case,” Jackson said Wednesday on his Twitch live stream. “”I signed with Bellator but then s**t happened and I left to sign with UFC. I talked to uncle [UFC president] Dana White and uncle [UFC CEO] Lorenzo Fertitta yesterday and they told me, ‘You’re cool. We’ll let you settle your stuff with Bellator without us taking you to court.’ So I did a post saying that the UFC stopped me from retiring.”

“I didn’t say anything about I was going to fight Michael Bisping or fight nobody in the UFC. I was just saying that the UFC was cool by not taking me to court if I had to go back to fight for Bellator.”

Jackson remains under a general injunction after a judge ruled against a motion to dismiss, and there’s no timetable on the case.

Jackson then blasted Bisping for being a poor teammate back in 2008.

“F**k Michael Bisping,” Jackson said. “He’s a traitor. I was going through another court case that you guys don’t know about. I was always cool with Bisping, helped him train. I even paid half on some of his training camps, but he wanted me to pay for his sparring partners. He would hurt my sparring partners and all this bulls**t. I would never care. I was always cool with him. Then he gave a statement against me in the other lawsuit. That’s bulls**t. How you going to do that to somebody who helped you out?

“That’s why I said I would like to fight Bisping. He’s a f***ing a**hole. I’ve never done anything wrong to him. You don’t do that to your teammates. He’s a cheap motherfucker because he doesn’t like to pay his manager when he owes him money. That doesn’t have anything to do with me. In order to help his case he lies on me and gives some bulls**t statements. I’d fight him on the playground if I knew I wouldn’t go to jail.”

Jackson then stated that he’s willing to fight on the December fight card in Japan (the same event that Fedor Emelianenko will be fighting on) if Bellator MMA will discontinue their lawsuit against him.

“I better start getting in shape because hopefully I’ll be fighting by Christmas,” said Jackson. “I’m looking forward to possibly fighting in Japan on New Year’s if everything goes right. You all need to hit up [Bellator CEO] Scott Coker to call the dogs off of Rampage. The UFC already said they’re going to be cool and aren’t going to take no legal actions if I go back and settle up with you guys.

“I’m down to go to Japan and fight on that card. We can settle up and get s**t back going, so I don’t retire. That’s the only other option. If they’re going to tie me up in court for a couple years, I might as well go retire and become a stripper.”

You can check out the video of him talking about his legal issues and Bisping here: