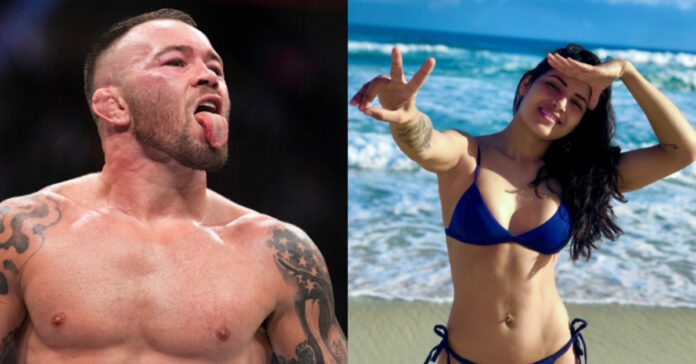 UFC strawweight Polyana Viana delivered a knockout blow to her UFC Vegas 64 opponent and to welterweight gatekeeper Colby Covington on the same night.

Polyana Viana blew up social media after she ran through opponent Jinh Yu Frey during a preliminary bout at The APEX in Las Vegas on Saturday night. ‘Dama De Ferro’ only needed 47-seconds to put Frey to sleep with a beautiful display of striking. However, Viana was far from done giving fans something to talk about.

MMA journalist Alex Behunin delivers fans a ‘Humanizing Athletes’ piece that focuses on a fighter’s favorite things outside of the Octagon. Behunin’s subject ahead of UFC Vegas 64 was Viana who responded to the post on Twitter, revealing details regarding a romantic tryst that she may or may not have had with outspoken welterweight star Colby Covington. Leaving little to the imagination, Viana revealed that ‘Chaos’ wanted to engage in an activity that Viana found to be quite uncomfortable. And no, not like in the back of a Volkswagon.

“Colby wanted me to finger him in the a**, but I did not want to. He got upset!”

Polyana Viana’s reveal appears to be a direct response to the former two-time title challenger’s comments he made about her during an interview with Submission Radio.

“Everybody’s going to have to use their imagination on that one. I am not claiming to be your boyfriend, but what’s up with titles these days? Why does there have to be a title? Why can’t two adults just have fun together? And that’s exactly what we did,” Covington claimed. “We spent a couple of days together and had a great time together. I got to work on my bedroom cardio, keeping world-class championship form. And that’s that. I have got nothing but respect for her. Polyana is a great girl, beautiful girl.”

Following Covington’s claim, she called the welterweight star “revolting” and denied that anything had happened between the two.