Controversy cast doubt over a third fight in a third consecutive weekend; this time at last night’s (Sat., September 23, 2017) Bellator 183 from the SAP Center in San Jose, California.

The main event between Benson Henderson and Patricky Freire featured an extremely close call, which Freire won by incredibly close and controversial split decision. As usual, many fervent angry mob inciters are calling it an extreme robbery, although it’ most likely not on the level of last weekend’s Gennady Golovkin vs. Canelo Alvarez travesty.

Derek Cleary had Henderson winning 29-28, and Wade Vierra and Marcos Rosales scored it as Patricky Pitbull winning 29-28 on both of their cards.

The loss, right or wrong, sent former UFC lightweight champ “Smooth’s” Bellator record to a brutal 1-3, with his only win ironically coming over Freire’s brother Patricio, whom he beat on an injury stoppage. The longtime veteran recently teased retirement, and with decisions like this, he may not want to stay around much longer.

Of course, he’s been on the other side of some incredibly close decisions, too. Check out the official scorecards for last night’s fight below. Were the scores off by as wide a margin as many believe? 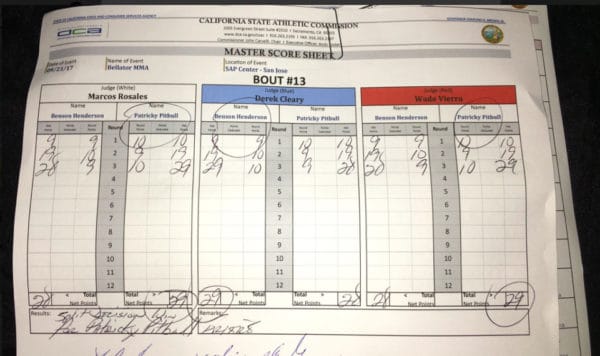