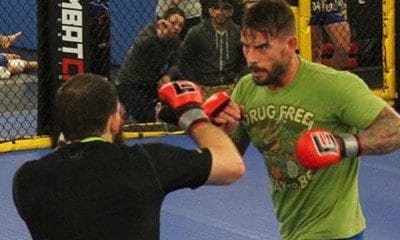 Former WWE champion Phillip ‘CM Punk’ Brooks is without a fight for his UFC debut later this year, but he’s apparently making some serious progress towards being ready to step into the Octagon.

Not surprisingly, Roufus said that Brooks has some things to work on but showed a ton of promise. Roufus posted another photo of himself with Punk, noting that ‘you can teach skill but you can’t teach will’:

Proud of @CMPunk did his 1st live #MMA Sparring today. You can teach #Skill but you can't teach #Will getting better every day! He's very #Dedicated thanks to all our #Team for the support! @ufc #UFC @danawhiteufc #Roufusport #CMPunk @onnit #ONNIT

With no prior MMA experience, Brooks is expected to be brought along slowly and face another inexperienced fighter in his first fight, which could take place late this year or even in early 2016.

He has a decent amount of Brazilian Jiu-jitsu training, and he’s at one of the best camps in the world to train his infant-level striking. Will that be enough to win his UFC debut, or will it all be chalked up as a money-grabbing spectacle?