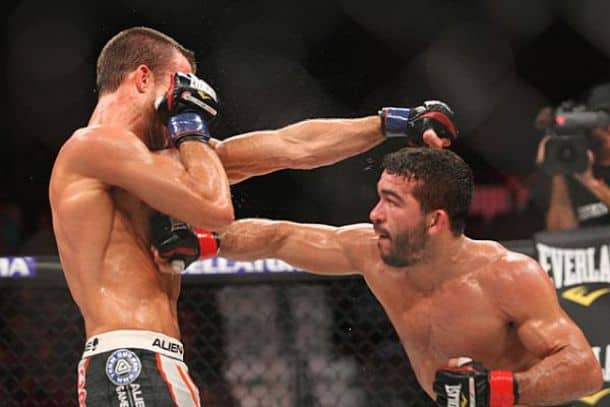 June 20’s Bellator 138main event between 41-year-old Kimbo Slice and 51-year-old Ken Shamrock from the Scottrade Center in St. Louis may not have the most relevancy in terms of today’s actual and legitimate MMA landscape, but the event’s freshly announced co-main event certainly does.

The bout will be a rematch of their first meeting, where Freire advanced to the Season Four Featherweight Tournament Semifinals with a third round TKO back at Bellator 37 in March 2011.

Freire was last seen defeating Daniel Straus via fourth round submission at January’s Bellator 132, his first title defense after winning the belt from Pat Curran at Bellator 123 last September. He’s won nine of his last ten bouts with the only defeat a close split decision loss to Curran at Bellator 85.

Karakhanyan is on quite the hot streak of his own after getting re-signed to Bellator and upsetting touted Olympic wrestler Bubba Jenkins with a first round submission at Bellator 132. He did lose his World Series of Fighting (WSOF) featherweight belt to Rick Glenn in his previous fight, but overall the Armenian-born fighter has won ten out of his past 11 bouts.

The last man to defeat him prior to that stretch is Freire, setting up a rivalry-fueled rematch that many may argue is the true Bellator 138 main event.