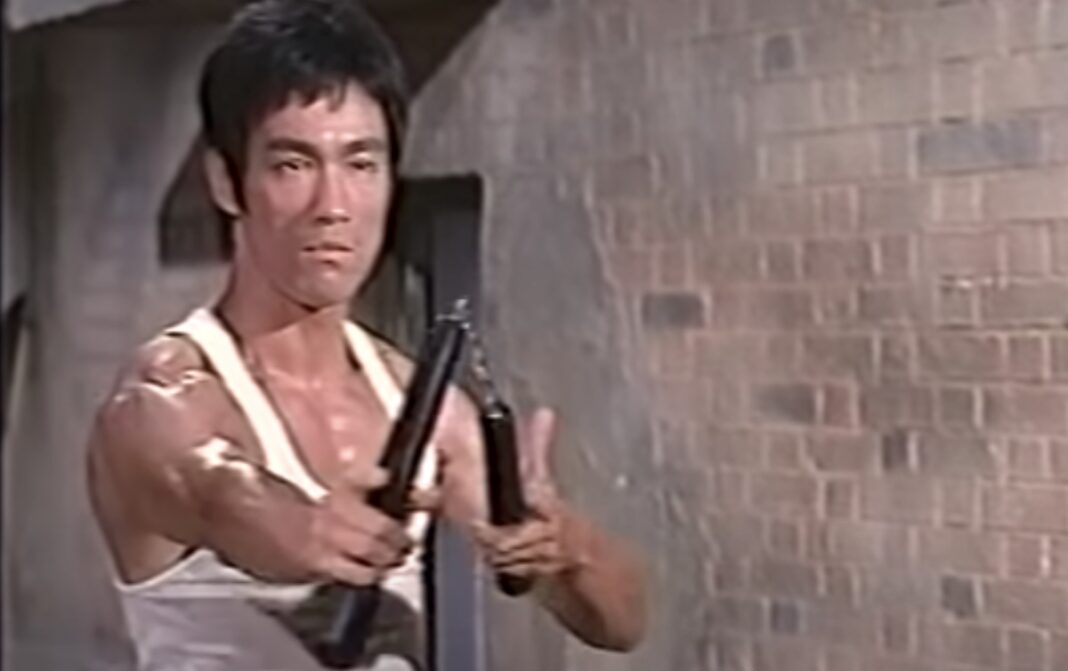 At one point in your life, you have picked up some nunchucks and you swung them around. Maybe even learned how to actually use them in a martial arts class when you were a kid.

Nunchucks are cool weapons that have a cool history that not many know about. Here is a complete history of the nunchakus. We’ll detail why they were used as a weapon and how they became popular thanks to some famous pop culture figures.

When were Nunchucks developed?

The nunchaku or nunchuck was first used in Okinawa. Its name is derived from the Ryukyuan languages that were spoken before the islands became part of Japan.

Originally nunchucks were not used as a weapon. They were a tool used by farmers for threshing rice and soybeans.

That was until Japanese warlords invaded the Okinawa islands hundreds of years ago. These warlords were brutal rulers and enforced strict laws upon the Okinawan people.

One law in particular that the warlords enforced was a ban on the ownership of weapons. This would lead the Okinawans to have to become resourceful in figuring out how to defend themselves.

Farming tools like the chain stick used to thresh rice and soybeans would be used as a weapon. Giving birth to nunchaku.

There’s also another theory that the nunchuck was derived from a wooden clapper called a “hyoshiki.” A tool made of two large square blocks joined by a chain cord that was used to warn villagers of invaders.

There is another weapon similar to the nunchuck that was created in the Philippines called a tabak-toyok. While it looks similar to the Japanese nun-chuck, there are some distinct differences.

The tabak-toyok or chako for short had smaller wooden sticks than the nunchaku, but a longer chain. At around 8 inches long from stick to stick it is better for attacking an opponent at long range.

Since the chako was smaller, those that used it were able to conceal and use it in street fights.

Were nunchucks popular to use in combat?

Nunchucks are used in a variety of different styles of Karate. Especially in Okinawan Karate, where it is used as a practice weapon to train the hand speed of the students.

They are also used in Karate schools that teach weapon katas. Nunchucks of course are one of the more popular weapons used for katas.

A person that specializes in use of nunchucks is referred to as a “nunchakuka.” Some of the more gifted nunchakukas will compete in kata competitions at different karate tournaments.

They create their own kata and perform it in front of judges to decide whose form or kata is the best.

Some of the different types of nunchucks include:

There are various different nunchuck techniques from swinging strikes, blocks, or sleight of hand tricks. Here are brief descriptions of each type of technique.

Figure eights are the basic nunchuck movement that everyone does when they first swing them. Going up and down your body making the number eight.

This is the basic movement you use to conceal the attack you want to use on your opponent.

After you learn the figure eight, you learn a more complicated movement called this arm switch. This is where you move the nunchuck(s) from hand to hand, which further conceals your attacks.

The hand roll is the most complicated nunchuck technique you can learn, which requires many hours of practice. Hand rolls are where you’re able to pass the nunchuck(s) while your hands are facing opposite ways. It takes a high level of hand high coordination to execute this movement.

Flaw of the nunchucks

If you have ever swung nunchucks around, you know exactly what their flaw is. Even though you can generate a lot of speed to strike an opponent, you can just as easily hit yourself with them.

We have all hit ourselves messing around with a pair of nunchucks at one point in our lives. Right after you do it you feel like an idiot and wonder why these were ever used as weapons.

You can point to exactly two instances within pop culture that made nunchucks popular. Bruce Lee and Michaelangelo from the Teenage Mutant Ninja Turtles.

When Bruce Lee was on the set of his film Fist of Fury in 1972. His Jeet Kune Do student and also his Filipino martial arts teacher Dan Insonato introduced Lee to the nunchucks.

Although what Insonato actually showed Lee how to use was the Filipino Tabak Toyok. The Filipino cousin of the nunchuck.

Lee’s use of this weapon in the movie created a huge surge of popularity with nunchucks. Pretty soon stores started selling them and martial arts gyms began offering nunchuck lessons.

Probably the other most famous figure that dual wielded nunchakus was the ninja turtle Michaelangelo. The ninja turtles popularity created another surge in popularity in martial arts. One of the biggest of course being the nunchucks that Michaelangelo used in the cartoon, movies, and comics.