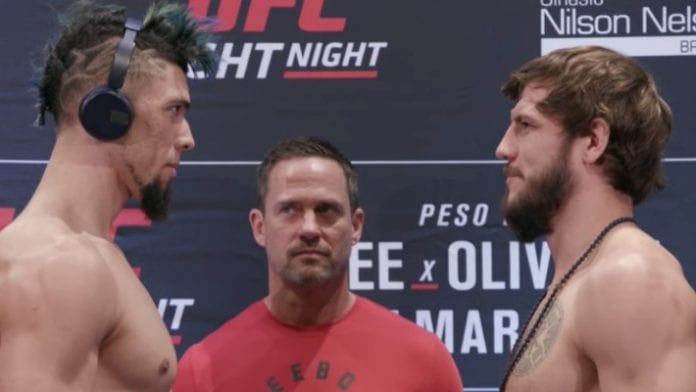 Next up on the UFC Brasilia main card is a light heavyweight contest between Johnny Walker and Nikita Krylov.

Round 1: Walker starts off with a front kick. Walker attempts a flying knee but it’s dodged by Krylov who looks to clinch him up. Walker reverses him onto the fence. Krylov reverses and looks for a takedown. Walker responds with elbows but Krylov is able to land the takedown partially. The pair land strikes on each other from the ground but neither are in a dominant position. Walker eventually gets to his feet and lands a big elbow. He lands a stinging jab soon after. Krylov lands a strike that seems to have hurt Walker. Walker responds with a spinning backfist. Krylov lands again and gets the takedown. Krylov moves to half-guard and ends the round with a couple of strikes.

Round 2: Krylov lands a couple of shots and lands a takedown. Walker is fighting it with an elbow as Krylov lands strikes. Krylov moves to half-guard as Walker appears a bit tired. Walker threatens wit a triangle choke but nothing comes of it. Krylov is still in control. Walker soon reverses and is on top. Krylov threatens with a leg lock. Walker gets out of it and looks to land strikes. Walker lands a knee to the body and ends the round with an elbow to Krylov’s face.

Round 3: The round begins the same as the last as Krylov looks for the takedown again and lands it. However, Walker reverses and is on top. Walker eventually moves to full mount but Krylov scrambles and ends up in half-guard. He later moves into Walker’s guard who looks to land elbows from the bottom. Walker threatens with an armbar but nothing comes of it. Krylov lands a big elbow. The fight comes to an end.