LowKickMMA.com
Home UFC News Myles Jury Believes He Has The Mental Edge Over His Opponents 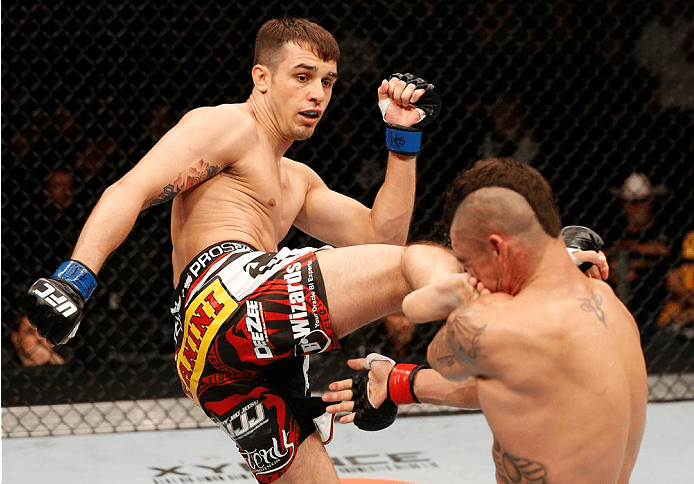 Undefeated lightweight prospect Myles Jury has had a tough road in his 14-fight career, although not necessarily during his time in the octagon. Having beaten Diego Sanchez, Mike Ricci, Ramsey Nijem, Chris Saunders and Michael Johnson since joining the UFC, “The Fury” says his most challenging moments have come in the gym.

Currently training with The Alliance MMA, Jury prepares with guys like Phil Davis, Dominick Cruz, Alexander Gustafsson, Mike Easton and KJ Noons. With such a rigorous team to keep him in shape, “The Fury” explains to Bloodyelbow.com that the gym is a tough place to be:

“The whole idea of my camp is to break my body down so bad,” said Jury. “To put myself in such mentally stressful situations where I have sparring partners rotating on me. Where I’m doing sprints so much that I want to puke, and all these bad situations so that mentally, physically and emotionally I’m ready when I get into a fight I know I’ve been through worse then anybody can do to me in 15 minutes. It gives me a mental edge.”

Jury certainly had a mental edge in his fight against Diego Sanchez at UFC 171, cruising to a very one-sided unanimous decision victory. Will he have such ease against the hometown favorite at Fight Night 52 though? He faces a lively JMMA star in Pride FC, Shooto and Sengoku veteran Takanori Gomi. “The Fireball Kid” put in a great performance in his FOTN winner against Isaac Vallie Flagg back at UFC 172, and will look for a repeat performance against Jury on Saturday.

“Throughout my career the biggest thing people try to do to me is just to get in my face and overwhelm me. I’ve made a career out of trying to not get hit and making people miss, just being defensively being a good counter fighter as well as being a good offensive fighter so I could sit there all day and just pick him apart.”

“I think sports psychologists are very important. Not only do you have muscles in your body, but your brain is also a muscle and I don’t think a lot of people use that. Everybody works out physically a lot, but not a lot of people work on mental tools and it’s just an extra advantage to have in fight.”

Keep an eye on the co-main event at UFC Fight Night 52, as Myles Jury could break in to title contention with a win over Takanori Gomi in Japan.