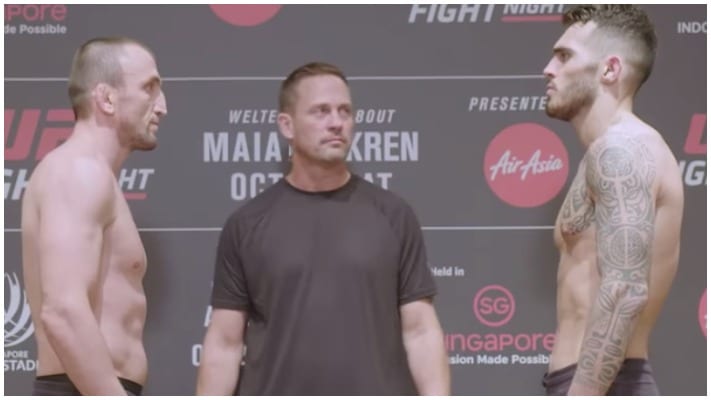 Opening the UFC Singapore main card is a welterweight bout between Muslim Salikhov and Laureano Staropoli.

Round 1: It’s a feeling out process to begin this fight as both fighters miss with their opening strikes just over 30 seconds into the contest. Salikhov misses a spinning kick that gets the crowd’s attention. Staropoli attempts his own which also misses. Not much meaningful action but it’s mostly Salikhov controlling and advancing forward. They both attempt spinning kicks yet again but they block or dodge it.

Round 2: Salikhov lands a spinning kick on Staropoli’s head but it is partially blocked by his forearm. Staropoli lands a kick soon after. He attempts another one but it’s caught by Salikhov who momentarily takes him down. Staropoli attempts a leg kick and is dropped by a counter strike from Salikhov but gets up immediately. Salikhov hurts Staropoli soon after who shells up and Salikhov unleashes a flurry on him. However, the Argentine somehow survives and recovers. Clearly a round for Salikhov.

Round 3: Staropoli comes out much more urgent but Salikhov counters with a clinch before they separate. Staropoli attempts a takedown but it’s stuffed easily. It’s a much more even striking battle in the third round similar to the first but nothing significant of note in comparison to Salikhov’s strike in the second round which should prove decisive.