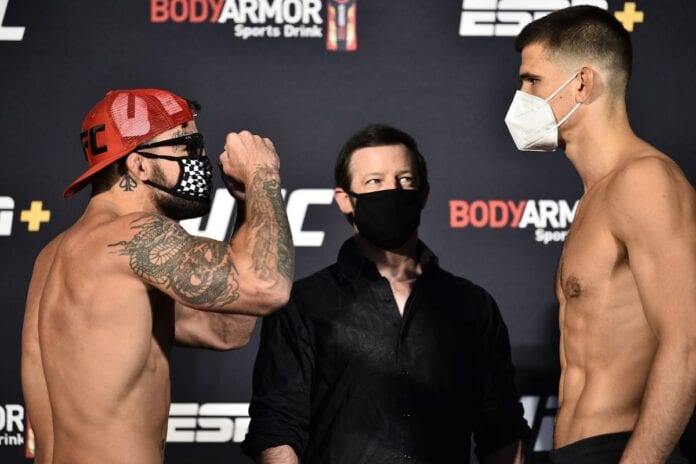 In the co-main event, popular welterweight fighters Mike Perry and Mickey Gall throw down. Perry is looking to get back to winning ways after falling short in consecutive fights against Vicente Luque and Geoff Neal. Gall beat Salim Touahri in his last fight and is hoping to make it two in a row in the biggest fight of his career.

Round 1: Mike Perry comes out firing big shots but they miss. Mickey Gall is backing up and using lots of movement to stay away from his powerful opponent. Perry is just walking down Gall who is sitting down on his own punches to try to earn some respect. The majority of strikes from both men are falling short right now but they have some serious power on them. A brief grappling exchange before they get back to striking. Gall is starting to get off with his shots. Right now, he’s got the sharper hands. Perry lands a couple of big shots to keep him honest. Gall is landing his shots and trying to get out the way. Gall throws a kick but its caught. Perry takes the back and slams his opponent to the mat. He’s on the back and uses Gall’s escape attempts to take the mount position. As the round draws to a close Perry postures up and begins throwing ground and pound.

Round 2: Gall starts the round well. He’s landing kicks and punches before eventually shooting in for a takedown. It’s deep but Perry uses his strength to fend it off. Gall attempts to drop back for a guillotine choke but it’s not really on. Perry is now on top and controlling his opponent. Perry postures up. He fends off a submission attempt before dropping some ground and pound. Gall grabs for a kimura and uses it to get back to his feet. He’s going after a takedown before breaking to throw a huge elbow. The two men separate and go back to exchanging technique in the middle of the cage. Gall eats a huge head shot and he’s on the floor. Perry goes after the finish. He lands two huge elbows but the bell sounds to save Gall.

Round 3: Perry goes straight back after it in round three. He’s landing combos on Gall who’s started to look tired. Gall lands a nice jab but Perry is starting to time his power shots to go over the top of it. Perry lands a flush superman punch – Gall takes it well. A very clear drop in output from both men. Perry seems to just to be taking his time, Gall, on the other hand, is spent. Perry secures the takedown with two minutes left on the clock. He moves into the crucifix position. Gall east an elbow before managing to roll out of it but he end up mounted by Perry. Another huge elbow from Perry – credit to Gall who clearly has a great chin. Gall manages to get out but doesn’t have the energy to stand up. Perry goes back in for more ground and pound but is caught in a triangle choke. He shakes it off and the horn sounds to end the round and the fight.