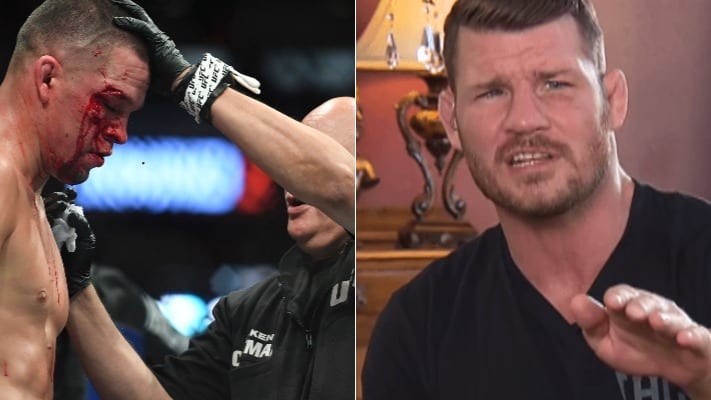 Diaz and Masvidal met in the UFC 244 headliner earlier this month in a contest that was largely dominated by the latter. Before the start of the fourth round, the ringside doctor called an end to the fight due to a cut near Diaz’s eye.

Despite the cuts and being bloodied, Diaz wanted to continue and later claimed his game plan would have come into effect in the championship rounds.

However, Bisping isn’t buying any of that, especially given the nature of how Diaz’s fight with Masvidal went:

“Let me tell you this and let me ask you a question,” Bisping said on his podcast (via BJ Penn). “This is a statement and a question, let me know what you think. You go out there you say, ‘I’m gonna fight.’ You think, ‘I know I’m gonna develop a game plan where I’m gonna conserve my energy. I’m gonna turn it on in the later rounds.’ Well you go out there and this guy is coming at you like a madman, and he’s beating the f*ck out of you. He’s dropping you to the floor. He’s making a mockery out of you in front of the entire world by beating the sh*t out of you.

“Let me tell you when somebody’s beating the sh*t out of you and you’re a world-class fighter you don’t go, ‘no it’s good. It’s good, I’m waiting until the later rounds.’ You fight back because that’s what we are. Inherently, we’re fighters. You’re f*cking coming at me, you’re dropping me, you’re beating the sh*t out of me. Beating me so bad to a point where the referee’s calling in doctors and they’re looking at this like they might potentially stop the fight. You don’t go, ‘Nah man I’m gonna wait for another two rounds and then turn it on.’ No, you start fighting right then and there.

“”Once again to quote the great Mike Tyson, ‘Everybody has a game plan until you get punched in the face,’ or punched in the face repeatedly, dropped to the floor and nearly knocked out on multiple occasions. Yeah f*ck that, that’s bullsh*t.”

There is a general belief among some fans that Diaz would have had an edge in the championship rounds. After all, he has some of the best endurance and cardio in the promotion. But then again, so does Masvidal who was already up three rounds.