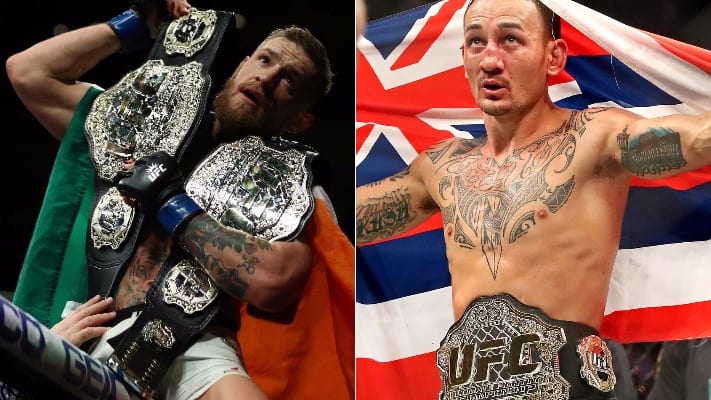 UFC featherweight champion Max Holloway is only interested in a rematch with Conor McGregor if he can face the best, most focused version of the Irishman.

Holloway is set to defend his title against Alexander Volkanovski at UFC 245 in December. It will be his second title defense since a failed attempt at moving up and becoming the interim lightweight champion earlier this year after losing a unanimous decision to Dustin Poirier.

In a recent interview with ESPN, McGregor — who outpointed Holloway back in 2013 — took jabs at the Hawaiian for his failure to win after moving up. However, he did mention he was interested in having a rematch.

But for “Blessed”, he’s not even sure McGregor is focused anymore:

“When Conor beat Aldo in December 2015 and when he beat Eddie in November 2016, for those 12 months, he ruled the world,” Holloway said on Ariel Helwani’s MMA Show on Monday (via MMA Junkie). “The world. Not just the UFC, the world. And the one thing I can remember and take away from that time was his focus. He was so focused. He decided what he wanted, and he said stuff, he pointed at this guy, he reached for the stars, he reached for the moon, and he made it happen. Magical.

“Listening to him now, I don’t see that same focus. If you’re going after everything, you’re not focused on anything. He called out like 20 guys in that interview.”

That’s not to say Holloway isn’t interested in a rematch. He would love to get that loss back and it would also be the most lucrative bout of his career. However, he’s only interested if he can face the best version of McGregor:

“I’m not interested in competing with him if he’s not at his best,” Holloway explained. “And he doesn’t seem healthy, and he doesn’t sound right. If he comes back and he says, ‘Hey, I beat Max when he was a kid, but I want to beat him in his prime to prove that I’m the best ever,’ then yeah I want the champ. I want that champ. I want that 2015-2016 champ. That mentality and that focus, and right now it’s just not interesting to me.

“I want to fight the best Conor McGregor. So he can go figure things out, and he can let us know.”

Do you agree with Holloway that McGregor lacks the focus that made him a worldwide star?