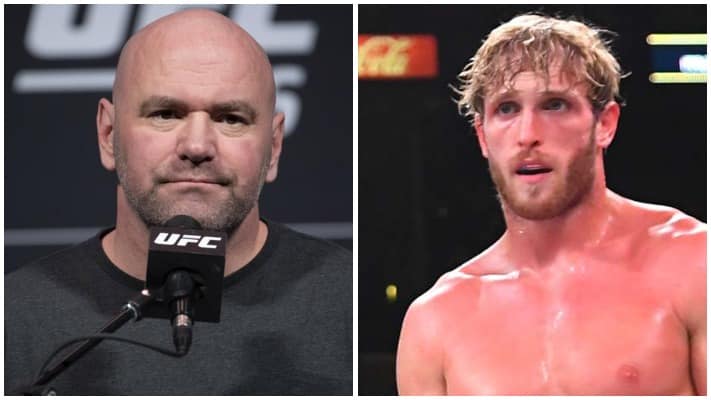 Logan Paul has revealed he received a surprise phone call from the UFC president ahead of Dustin Poirier vs. Conor McGregor III.

The YouTube star turned boxer has always had a pretty amicable relationship with Dana White but the same can’t be said for his younger brother.

Jake Paul has consistently criticized the UFC boss publicly for mistreating and underpaying his fighters.

So when a call came in from White ahead of UFC 264, Logan admits he wasn’t quite sure how the conversation would go down.

“I answer, and I’m not sure what to expect,” Paul said on his Impaulsive podcast. “Jake’s p***ed him off, him and Jake have an ongoing feud.

“But I’ve come out publicly and said I love Dana White, always have always will, he’s a ruthless businessman, the head honcho, but I’m not sure how he feels about me.

“By default, my relationship with my brother will always take precedence but if I can be cool with someone I will.

Paul then explained that the call went great and ended with White offering him the best seats in the house for the biggest UFC event of 2021.

“So he calls me up and says ‘hey man, is this Logan’, and I’m like ‘yeah what’s up Dana’, and he explains that we’ve got two tickets, but he says he has better ones.

“These seats are in what’s called ‘billionaire’s row’, and he says I’ll have a much better experience, and I’m like flabbergasted and honoured.

“Dana White is accommodating me, this is fantastic, and I’m like ‘sure’, I told him ‘thanks Dana,’ and I hung up and Jake is like ‘that was weird’.” (Transcribed by Mirror Fighting)

Are you surprised to hear Dana White called to offer Logan Paul and Jake Paul better seats at UFC 264?