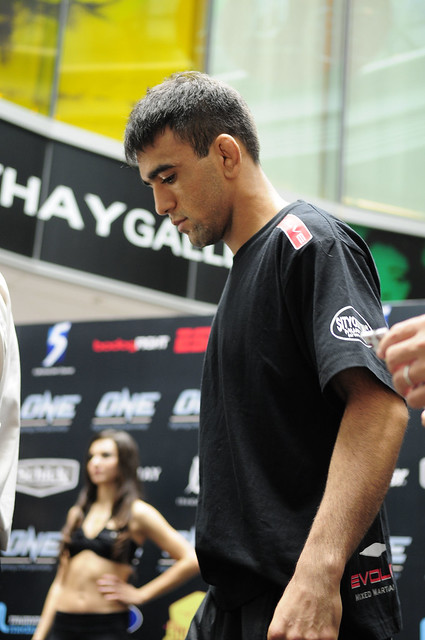 Just three weeks ago, Saturday September 3rd I set my alarm clock for 4AM pacific time to witness ONE FC’s very first card live from Kallang, Singapore. The great continent of Asia where my bloodline comes from is the true Mecca and birth place of all Martial Arts. The sport of MMA in North America has evolved, improved, and changed so much in the last ten years. The birth place of styles may have a long way to go, but ONE FC is a huge part of the growth and evolution of the sport in the Far East.

A big part of the MMA renaissance going on in Asia is actually a Brazilian fighter. A World Jiu-Jitsu Champion, Brazilian National Champion and black belt, Leandro Issa trains out of Asia’s elite gym Evolve MMA. He stood out to me personally from watching the fights early in the morning with some big knees to his grounded opponent (those are legal in ONE FC) top Korean prospect Soo Chul Kim. I also can’t forget to mention his solid MMA Muay Thai game to compliment his world class BJJ.

The owner of Evolve MMA Chatri Sityodtong has a gym policy of recruiting the best he can find in Muay Thai and BJJ and having them cross train together every day in order to make his fight team as competitive as possible. This philosophy in training in combination with having a world class facility has attracted the likes of DREAM Lightweight champion Shinya Aoki, UFC fighter Rafael dos Anjos, and world champion boxer Yodsanan Sityodtong. Even guys like UFC superstar Rich Franklin, Renzo Gracie, and Matt Hume know the potential of the Evolve MMA camp.

Thanks to my friend James Goyder and the good people from Evolve MMA, we were able to get an interview with the up and coming Brazilian star based out of Singapore. You can also see his ONE FC fight in full below following the interview.

You’ve impressed a lot of people with your Muay Thai in your fight, is that something you have been working hard on?
Yes. I’ve been working Muay Thai at Evolve MMA with the best in the world, Chatri Sityodtong and all the other Muay Thai instructors helped me a lot. I want to be a complete fighter.

You made good use of the rules by throwing a lot of knees to the head of your grounded opponent. Do you like the ONE FC rule set?
I liked the new rules, we have to adapt to the rules in attacks as well as defence.

Have you ever fought in front of such a big crowd before; did it affect you at all?
That was the biggest show I’ve ever fought on. I really liked it and I can’t wait to fight again. It was great to fight here in Singapore in front of my fans.

How was the weight cut, do you feel like your home is at 135 lbs now?
This was the first time I fight 135 lbs, I felt good at this weight I want to be ONE FC champion in this category.

There was a lot of support from Evolve MMA students in the crowd, did that help you?
It helped me a lot, was really cool to fight with all the fan support. Thanks to everyone who attended ONE FC, it wouldn’t have been as cool without you guys.

You got in some good positions but you weren’t able to submit Soo Chul Kim, were you surprised by how well rounded he was as a fighter?
I watched the video of the fight and I think I missed a few positions but he was very slippery with good defence.

Did you roll with Shinya Aoki much when you were training for this fight?
Shinya was here for one month training with us, we trained together every day. Shinya helped us a lot in training, he is a great teammate and I learned a lot from him.

Did you enjoy getting to train with all the Gracie’s in the week leading up to the fight?
It was great; Renzo Gracie and his team came to Evolve MMA to train with us. That way we could share information.

Did you enjoy the whole ONE FC experience; have you ever fought for a show on that scale before?
It was a pleasure fight in ONE FC and I am sure this show will be the largest in all of Asia very soon. I can’t wait to fight again.