LowKickMMA.com
Home UFC News Lawler vs. McGregor Was A Fantasy – Is Diaz vs. ‘Ruthless’ Any... 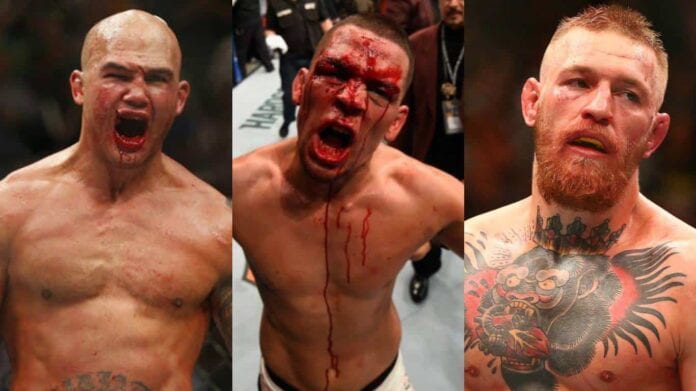 UFC 196, which went down this past weekend (March 5, 2016) from Las Vegas, Nevada, shot off fireworks as it was expected to do, and it also made an impact by leaving the MMA world in limbo in ways we perhaps hadn’t seen coming.

It was a night of jaw-dropping shock and momentous upsets, specifically regarding the main event, a welterweight showdown between reigning 145-pound kingpin Conor McGregor and late replacement Nate Diaz.

Accepting the bout on just ten days notice, Diaz was the clear underdog with many wondering what type of shape he would appear in on fight night. Despite competing two whole weight classes above his usual home, many had expected the “Notorious” one to once again back up his brash, incessant trash talk and put his devastating left hand to work.

In fact, UFC President Dana White had even expected McGregor to eventually clash with 170-pound titleholder “Ruthless” Robbie Lawler if he were indeed victorious over Diaz.

In mixed martial arts, however, anything can happen. When two elite level fighters set foot into the Octagon and the door gets locked, the expected becomes the unexpected, and all bets go out the window.

In the end, McGregor most likely took the first round over Diaz. He mixed up his striking, and planted his patented left hand on his chin. Unlike his recent featherweight victims, however, Diaz; the larger, heavier man, ate the Irishman’s shots and kept coming forward.

Diaz brushed off everything that was thrown at him, leaving the “Notorious” one in a state of disarray. McGregor, after bloodying Diaz early on, appeared to tire, and the Stockton native’s wealth of experience and grappling prowess proved to be the difference maker.

It was in the second round that Diaz would sink in a rear naked choke, forcing McGregor to tap, and leaving the thousands of Irish fans in attendance silent. It was also in that very moment in which McGregor’s face displayed true struggle, and his hand rapidly tapped that the idea of Lawler vs. McGregor became a far-off fantasy.

While Diaz was undoubtedly the bigger man, the Stockton native is normally a 155-pounder.

Lawler, on the other hand, is a former middleweight, and simply a massive welterweight. Not only that, but his fighting style would likely provide serious issues for a smaller McGregor.

Diaz, while known for his relentless volume striking, isn’t necessarily that powerful of a puncher, and he still wobbled McGregor. Lawler, however, is a different type of animal. The “Ruthless” one possesses brutal knockout power in both hands, and deadly finishing ability. I’d have to assume that he’d simply be too much for McGregor.

With that being said, could we be awaiting a Lawler vs. Diaz scrap in the near future?

While the fight would undoubtedly be a massive sell, does Lawler vs. Diaz sound any better than Lawler vs. McGregor?

Diaz would present some interesting stylistic challenges, but one would have to think that Lawler’s power, pressure, and overlooked ability to keep the fight on the feet would be enough to overwhelm the younger Diaz brother.

What do you think of the now wide-open landscape created by UFC 196’s amazing outcome?