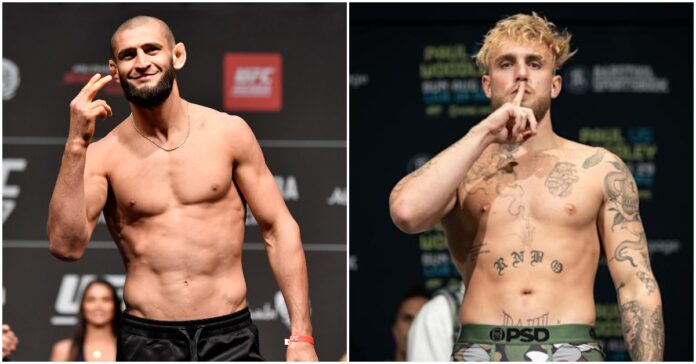 When Khamzat Chimaev told Dana White he would fight anyone at any time, he really meant it.

‘The Wolf’ is claiming that he would ‘smash’ both Logan and Jake Paul in a boxing match on the same night.

It is not a stretch to call Chimaev an absolute mad man inside the octagon. He has run through everyone he has gone toe to toe without taking any real damage in four UFC fights. It takes a special kind of fighter to lift up their opponent, carry him and slam him in front of Dana White. He did all this, just so the UFC president was able to watch the mauling of Li Jingliang at UFC 267.

Chimaev wouldn’t mind stepping in the Paul’s newfound ‘profession’ and ‘smashing’ both of them inside the boxing ring.

The undefeated MMA prospect tweeted a few times at the brothers.

Paul answered back saying, “Listen Kumquat… you are just another UFC fighter pretending you can box. Sit down, shut up and pray you get paid fairly.”

The UFC is currently looking to book another opponent for Khamzat Chimaev before the year is up.

Chimaev is already a fan favorite as he is dominant inside the octagon and a natural on the microphone as well. All he wants to do is fight and “murder everyone”. This is the same guy that took two fights only six days apart and finished both in dominant fashion.

The Paul brothers on the other hand have upcoming bouts inside the boxing ring. Jake Paul is fighting Tommy Fury on Dec.18 in Tampa, Florida. Logan Paul’s next fight is yet to be confirmed, although their have been a few rumors of potential opponents.

Do you think Khamzat Chimaev could beat both Paul brothers on the same night inside the boxing ring?