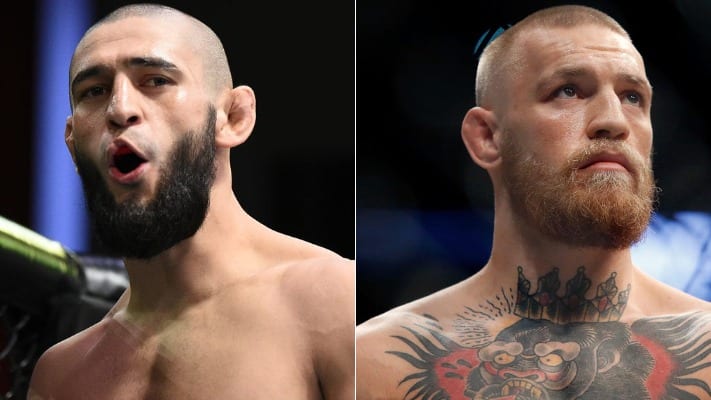 Khamzat Chimaev has come out and made statements about his true feelings about Conor McGregor.

The highly-touted prospect makes his return to the cage this weekend at UFC 267. He will face Li Jingliang in a welterweight contest a couple of fights before the first title bout on the card. This is Chimaev’s first fight in over a year since contracting a bad case of COVID-19 in that time.

While talking to the media in lead up to his fight this weekend, Chimaev was asked about his opinion on Conor McGregor. The soft-spoken Swed had this to say about the former double champ. (H/T rt.com)

“Yes, he achieved everything in the UFC, he was a champion in two weight classes,” said Chimaev. “This I respect with him. But it is impossible to respect him as a person.”

McGregor has been getting into trouble outside of the cage recently. He got into a scuffle with American rapper Machine Gun Kelly at the MTV VMA’s this summer. After that, he followed it up with an incident in Italy a couple of weeks ago. The Irishman allegedly punched an Italian DJ in the face during a party.

Chimaev burst onto the scene last year during the UFC’s run of ‘Fight Island’ shows. He won his debut in dominant fashion, finishing John Phillips with a D’arce choke in round 2. Chimaev then came back just 10 days later and defeated Rhys McKee via first-round TKO. He then knocked out Gerald Meerschaert in just 17 seconds at the UFC Apex in September of 2020.

What do you think of Khamzat Chimaev’s opinion of Conor McGregor?