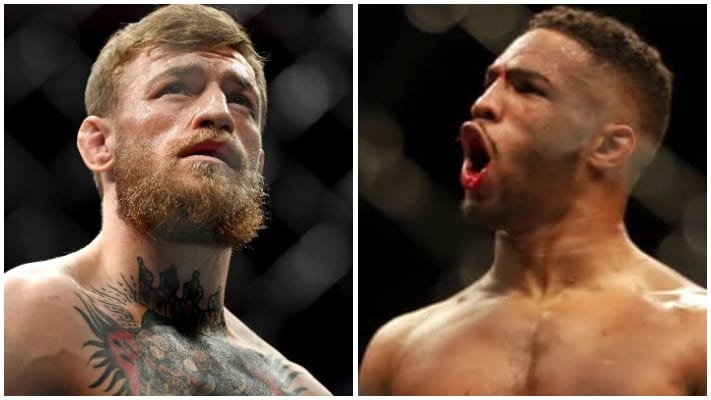 Although he acknowledges it is unlikely, Kevin Lee wants to be Conor McGregor’s comeback opponent for January.

Lee got back to winning ways with an emphatic head kick knockout of the formerly unbeaten Gregor Gillespie at UFC 244 earlier this month. It ended a two-fight losing run for the Detroit native. His next opponent seems likely to be Islam Makhachev — with the pair having gone back-and-forth for a while now.

However, one opponent “The Motown Phenom” would really like is McGregor, who is set to return to action on the January 18 card. The problem is Lee is a bad matchup for the Irishman which is why he feels it’ll never happen:

“They’re still trying to find an opponent for Conor McGregor on Jan. 18,” Lee told MMA Fighting. “I know they’re talking about “Cowboy” [Donald Cerrone], but there’s no contract signed there. If he’s a little bit like me, if he’s a competitor at his heart, then he’s going to want to take on the tough wrestler. He should if he wants to get back to Khabib [Nurmagomedov] and really wants to get back into title contention. That fight would make sense.

“It’s not going to happen. I’ll be real. It’s not going to happen. They’re not going to let me within 10 feet of that man, but these are the things that I kind of see. … I think a lot of real fans will see that and know that. I don’t think he’s willing to do what I’ll do. I don’t think he’s willing to take on the guy who’s on the up and up. You’ve got your back up against the wall, and he’s trying to make a name off of you. I think they’re going to avoid those types of fights. I think they’ll avoid me, they’ll avoid [Justin] Gaethje, (and) they’re going to avoid some of these other guys who can really give him a challenge.”

Lee actually has one fight left on his deal and to have it be against McGregor would be a very lucrative option. But again, it’s not up to him, but rather the UFC and McGregor:

“I’ve got one fight left on my contract,” he added. “If that’s the fight, I’ll take it at the money I’m at right now, to be honest with you. I think it would be way bigger than him versus ‘Cowboy.’ But that ain’t for me to say. If they call me, I’m all ears.”

Do you want to see McGregor vs. Lee?