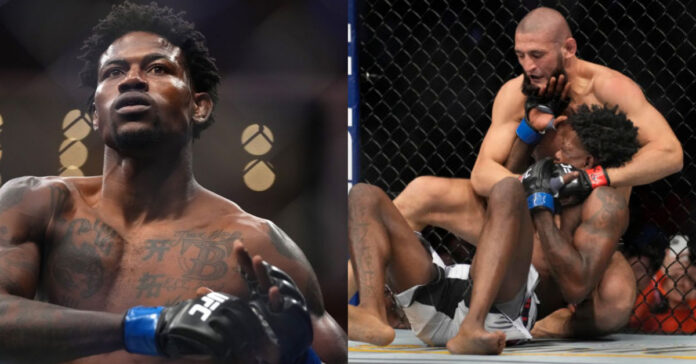 Kevin Holland has opened up about his loss to Khamzat Chimaev at UFC 279.

Holland was initially scheduled to take on Daniel Rodriguez on the main card but got shuffled for the co-main spot opposite Chimaev after the top-ranked welterweight prospect came in seven-and-a-half-pounds overweight for his original match. They got pitted against each other in a catchweight bout at 180 pounds.

Holland and Chimaev got the chance to settle their feud this past Saturday. “Borz” came out firing all cylinders to secure a first-round finish over the longtime rival without absorbing a single significant strike, a feat he achieved for the fourth time in the promotion.

Following the loss, Holland took to his Instagram to give his take on what happened and where he is looking to go ahead. He named two potential opponents he would like to compete against.

“Yo, guys. I lost an amazing grappling match last night, I mean fight,” Holland said (ht BJ Penn.com). “My bad, Chimaev is one hell of an athlete. Still gonna be talking sh*t cause you know who I am. I hate ending the year like this, so I would love to go in there against a striker.

Kevin Holland received a lot of support from the crowd in attendance as Chimaev played up his new role of being the villain. Chimaev’s weight miss put the event at risk. Had Holland not stepped in to trade his foe on a day’s notice, things would have turned out very differently for the UFC.