One-time BKFC competitor Justin Thornton has passed away due to injuries suffered in a knockout loss in August. He was 38.

Bare Knuckle Fighting Championship released a statement on Thornton’s passing after an initial report from MyMMANews.

“This morning we were very saddened to be notified of the passing of one of our fighters, Justin Thornton, who competed at BKFC 20 on August 20, 2021,” BKFC president Dave Feldman said.

“We join the rest of the combat sports community in sending our deepest condolences to his family and loved ones.” (h/t MMA Fighting)

Thornton faced off against Dillon Clecker at BKFC 20. The fight ended in just 19 seconds, as Thornton was knocked unconscious and fell face first to the mat. He was taken to the hospital afterwards and was reportedly partially paralyzed from his injuries. He would remain in the hospital for several weeks as he fought off an infection from a spinal cord injury. A GoFundMe campaign was started to help his family cover medical expenses.

Prior to joining BKFC, Thornton was a mainstay on the regional MMA circuit. He compiled a 6-18 record over his career, fighting notables such as Chase Sherman and Walt Harris, as well as Contender Series alumni Michael Lombardo and Austen Lane. Most notably, he took part in a highly-publicized bout against Titan FC COO Lex McMahon in November 2020.

Everyone at LowKick MMA sends our deepest condolences to Justin Thornton’s family and friends. 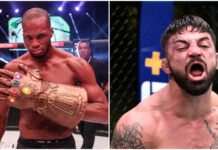 Michael Page Details Why He’ll Fight Mike Perry At BKFC 27: “A Rite Of Passage As A Fighter” 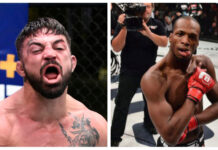