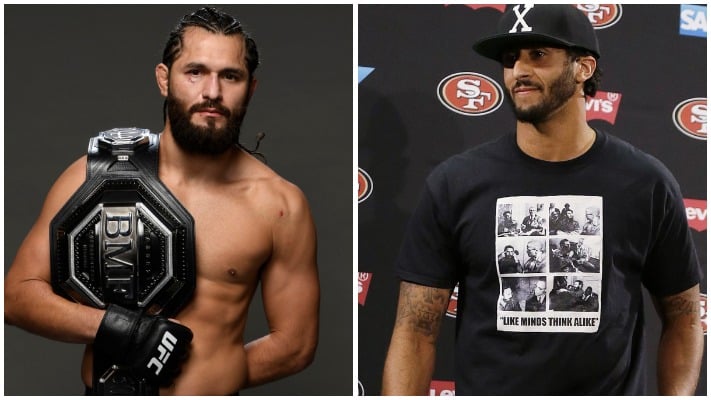 ‘Gamebred’ commented on an Instagram post from Turning Point USA. The post showed the footballer sporting a Fidel Castro shirt in 2016 alongside a picture of the recent protests in Cuba.

“Know ur history and facts cowards like this fool should be sent to live in Cuba see what they say after a day there,” Masvidal wrote.

Kaepernick found himself in hot water at the time for wearing the controversial shirt. The 33-year-old defended himself against the critics and insisted Castro had done good things for Cuba in terms of education and health care.

“I agree with the investment in education,” Kaepernick said at the time, via Sports Illustrated. “I also agree with the investment in free universal health care as well as the involvement in helping end apartheid in South Africa. …I would hope that everybody agrees those things are good things. And trying to push the false narrative that I was a supporter of the oppressive things that he did is just not true.

“One thing that Fidel Castro did do is they have the highest literacy rate because they invest more in their education system than they do in their prison system. Which we do not do here, even though we’re fully capable of doing that.”

Masvidal recently shed some light on how his family escaped the “killing machine” that is communist Cuba.

“My father escaped Cuba when he was 14 years old,” Masvidal said. “And I’ve only heard the horror stories since I could process thoughts of how s— this communist regime, killing machine is. So I just want to shed some light on Cuba – big SOS signal for them.

“This oppression has been going on for 61 years. It’s not just because of the pandemic, or it’s not just because they ran out of medicine, because they’ve been out of medicine, they’ve been out of resources and food. Because of the corrupt government, the extreme corruption over there where only a few at the top eat and everybody else has to suffer – those days have to come to an end.” (Transcribed by Fox News)

Do you think Jorge Masvidal was right to call out Colin Kaepernick?