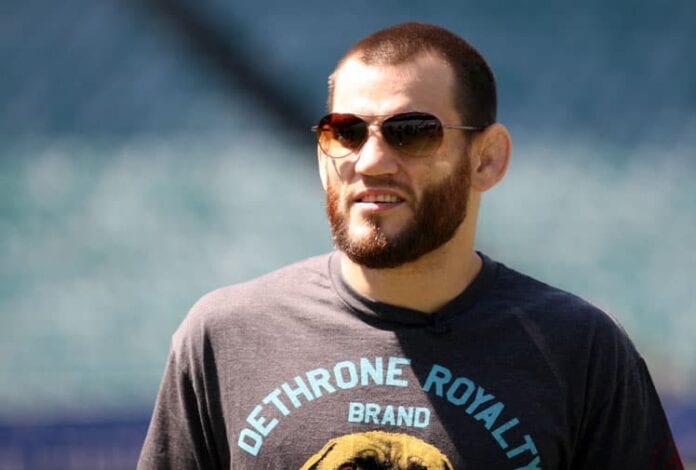 Instead, the TriStar MMA coach believes Fitch’s recent success is due to the use of performance-enhancing drugs (PEDs). Speaking to “The MMA Hour” earlier today (Mon. April 22, 2019) Fitch responded to Zahabi’s claims. Fitch seems to put no stock into Firas Zahabi – coach of welterweight legend Georges St-Pierre – and his words (via MMA Fighting):

“You’re not going to get far. So I don’t care. People can think whatever they want to think, I live my life for me and my family.”

Fitch opened up on getting caught with elevated levels of testosterone in his loss to former WSOF champion Rousimar Palhares. He called it the ‘best thing and worse thing’ that had happened to him:

“I fell down a spiral of depression. I was struggling with my personal family life and finances, I got to a place where you could see other guys around you — I found out about guys who I fought who were on TRT, the therapeutic exemptions, I learned about Vitor Belfort’s testosterone being covered up and him being allowed to compete anyway. There were rumors of other guys, that happening too also. And then I was taking a 70 percent pay cut, at least 70 percent pay cut from going from the UFC to World Series of Fighting.

“But yeah, that was probably the stupidest thing and the best thing that ever happened to me.”

As for MacDonald, he was unsuccessful in his attempt to become Bellator’s first-ever two-weight champion back in September. Middleweight champion Gegard Mousasi smashed those hopes in the second round of their Bellator 206 main event meeting. It ended a two-fight win streak; however, MacDonald retains his 170-pound title. Now, he looks to get back on the winning track with a successful title defense against Fitch.