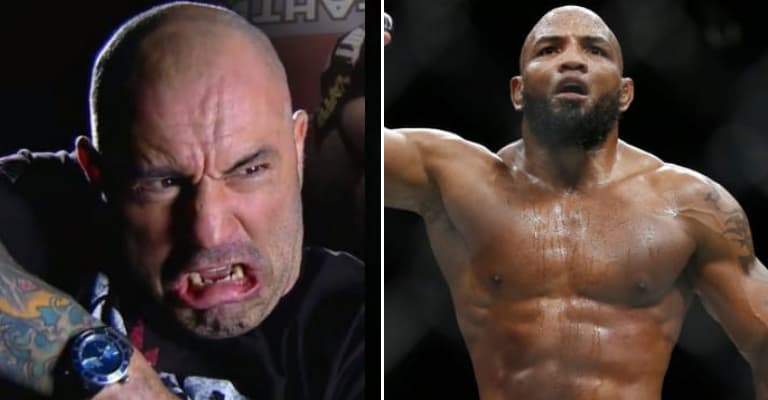 Although he was unable to win the interim UFC middleweight title after missing weight, Yoel Romero put one of the most brutal knockouts of the young year on Luke Rockhold in the main event of last Saturday’s UFC 221 from Perth, Australia.

The win put ‘The Soldier of God’ in line for the next title shot at middleweight champ Robert Whittaker, who’s currently on the sidelines recovering from staph and chickenpox. But on an even bigger level, the KO showed just how scary and explosive Romero is, perhaps to the point of him being the most athletically talented fighter to ever step into the Octagon.

One man believes that could be the case, and that’s longtime Octagon commentator Joe Rogan. Rogan recently opened up on Romero’s dominant stoppage on a recent edition of The JRE MMA Show, noting to Brendan Schaub that Rockhold’s recent camp change may have been a great idea, but he simply ran into a buzzsaw in Romero:

“Look, it might have been a good move for him but he fought Yoel Romero. I mean the reality is, Yoel Romero is f****** horrifying.”

UFC veteran Schaub then said Rockhold could beat Romero on any given day as well, something that Rogan wasn’t as quick to agree with:

As for Rockhold’s next move after two brutal knockout losses in his last three UFC bouts, Rogan actually suggested a move up in weight may help Rockhold just as it has surging fighters Whittaker and Rafael dos Anjos:

“Who knows? Maybe, I mean, he’s been talking about an inevitable climb to 205. He might be just like Whittaker, and like, um, who else are we talking about? Rafael dos Anjos, he might be a better fighter at 205.”

Indeed he might, and facing a fighter of Romero’s caliber certainly doesn’t leave much room for error. Would Rockhold fare better against the bigger fighters at light heavyweight where he wouldn’t have to cut as much?