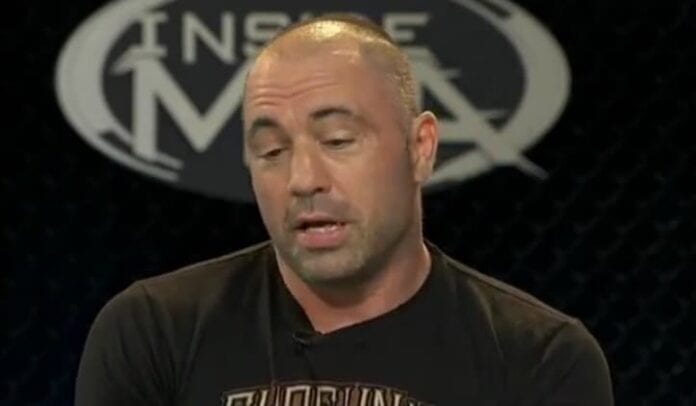 Joe Rogan’s reaction to the UFC-Reebok errors, unlike Dana White, is refreshingly honest. More people need to be as frank as Rogan…

The UFC is going through a pretty rough patch in the media lately. With a myriad of failed drug tests and controversial happenings involving their biggest draws, the last thing they need is more shtick from the Reebok sponsorship deal. The partnership with the sports giant has become more of a running joke than a serious statement, and the most recent errors from the production line have been getting more and more offensive.

Check out the quotes from his latest podcast episode, as transcribed by the forum users on Reddit:

Rogan: Did you see the latest Reebok fuck-up?

Rogan: “Anderson Aldo” T-shirts! And, they wrote Anthony Pettis’ nickname as “The Mauler.”

DJ: Are you serious?

Rogan: YES. I swear to God, it feels like someone inside of Reebok is trying to sabotage the company. It’s so retarded! The mistakes are so frequent and so bad! The misspellings of the names, over and over and over again. It’s like – do you have a single person that’s paying attention to that shit?

DJ: There’s a lot of people, but I understand they could have one person, like “your job is to make sure before the product goes out, you check the fucking name.”

DJ: Hey, that’s why I rock the black, my friend. Black and gold.

Indeed the UFC Reebok deal is turning out to be much more hassle for the promotion than they ever would have hoped.You can’t help but ponder where the joke is in all this error-filled clothing line. Is there something we are missing?

For now, check out another hilarious Joe Rogan reaction: