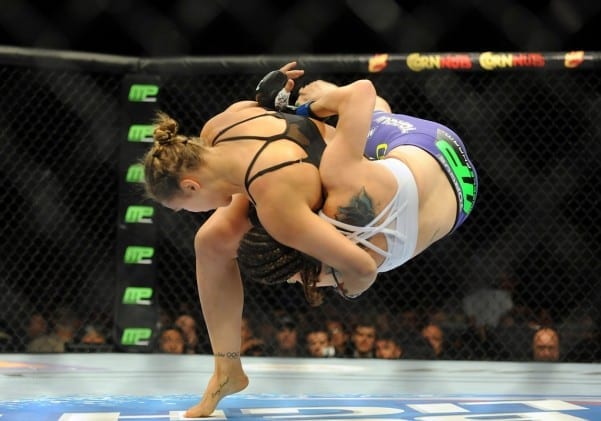 Undefeated UFC women’s bantamweight champion Ronda Rousey has been the definition of dominant throughout her 10-fight MMA career, which only began in early 2011.

She enjoyed a meteoric rise to prominence as the Strikeforce women’s champion thanks to a string of six straight armbar submissions, parlaying that title into the UFC belt and going on to finish her first four bouts in the Octagon.

Many called Rousey a sort of one-trick pony due to her previous reliance on her lethal armbar, but she’s since knocked out Sara McMann at UFC 170 and most recently Alexis Davis at UFC 175 with two viciously quick and efficient striking displays.

“Rowdy’s” striking skillset, which she hones at with coach Edmond Tarverdyan at the Glendale (Calif.) Fighting Club, has rapidly caught up to elite level judo skills, making her an unstoppable force in the still-developing UFC women’s bantamweight division.

Her dominance has understandably earned the praise of many who’ve deemed Rousey a “once-in-a-lifetime” type of athlete, but according to UFC Octagon announcer Joe Rogan, that isn’t enough praise.

Rogan appeared on last night’s UFC Tonight to offer his thoughts on Rousey, calling her a “once-ever” type of athlete:

Rogan makes a good point in that Rousey not only brings world-class skills to the cage, but also balances out her fighting prowess with the beauty that has already earned her several prominent movie roles. Like it or not, female fighters will always enjoy more success in terms of media exposure if they are deemed attractive by fans.

Right or wrong, it’s just part of this new avenue of the fight game, an avenue that Rousey has seemingly both pioneered and mastered in a very short time. Her mainstream media success may lend to the belief that she doesn’t have much time left in the fight game.

And it’d be tough to blame her, as the money is obviously better in Hollywood and there just aren’t that many challengers talented enough to give Rousey a run for her money.

She’ll face what could be her toughest challenge when she meets undefeated Cat Zingano in the co-main event of February 28’s UFC 184 from Los Angeles. If she meets some resistance from Zingano, her time in the fight game could be extended. If not, we could be seeing less and less of the champion unless her oft-discussed bout with Cristiane “Cyborg” Santos somehow comes to fruition.

Aside from that, there just aren’t many bouts left for Rousey, and the call of movie studios could be strong. Will we continue to see this “once ever” fighter ply her trade in the Octagon for much longer?