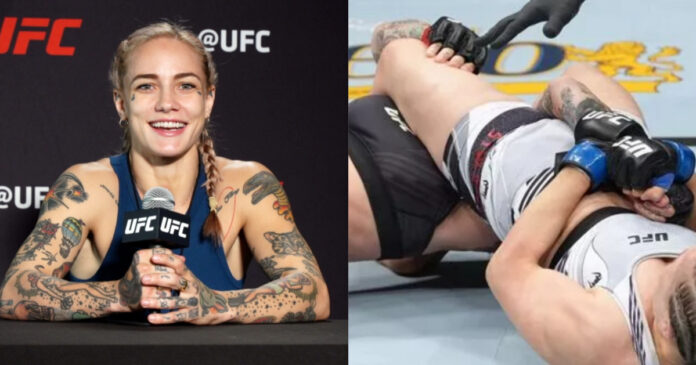 UFC bantamweight, Jessica-Rose Clark has claimed that Julija Stoliarenko held on to the armbar after Clark tapped. She also notes that she will now likely require surgery.

The first bout of UFC 276 saw Jessica-Rose Clark and Julija Stoliarenko square off in the early prelims in Las Vegas. Clark would find some success early on the feet, but Stoliarenko’s grappling was evidently superior, taking her down and quickly submitting Clark with an armbar.

The replay of the first-round finish would show a clear break or dislocation of Clark’s arm, with the Australian feeling her opponent had held on for the submission for too long.

“Well, that sucked. I just got back from the hospital,” Clark stated in an Instagram post. “I am probably going to need surgery on my elbow, she did a really good job of continuing to armbar me after I tapped, but that’s fine. It is what it is. I felt great.”

“I cried the entire time I was at the hospital, but I’m feeling all right. I’m understandably heartbroken, but I did everything right this camp. I’m going to have this surgery and heal up and then come back and be better – and that’s all I can do.”

Last Saturday saw Stoliarenko earn her first UFC victory afte going 0-4 in the promotion and she did it using her signature armbar, a technique that has won her over half her fights.

During a post-fight press conference, Stoliarenko would react to the gruesome injury. “If I get a submission, I’m going to snap it until people stop it,” Stoliarenko said. “Of course, I don’t want to injure my opponents, but it’s up to them when to tap. If she’s not tapping, I’m going to do my work.”

Do you think that Stoliarenko held on to Jessica-Rose Clark’s arm for too long?