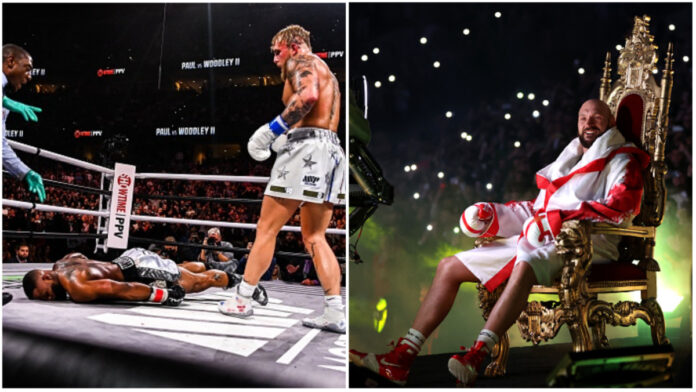 Viral social media sensation turned pro boxer Jake Paul is in a gambling mood, and he wants to raise the stakes of Tyson Fury’s $100,000 bet and wager a far more significant amount of $3 million.

They’re betting on the recently re-announced Tommy Fury vs Jake Paul fight, a bout that was scheduled last year but fell through due to Fury suffering an injury. Which caused Tyron Woodley to fill in as a replacement, leading to what may be the biggest highlight knockout of Paul’s short career.

Now, the Fury vs Paul fight is back on, and the stakes couldn’t be higher. The last time around the older Fury brother went on record to say that if Tommy Fury lost, he would have to change his name. Now, Tyson Fury is willing to put money on the line, wagering on his younger brother’s success. But, the real question is will Fury accept the increased bet of $3 million?

Jake Paul Responds to Tyson Fury’s Bet With Bigger Wager, Claims He Can Tell the Two Brothers Are Afraid

The video starts with Jake Paul showing a clip of Tyson Fury saying: “I’m backing Tommy. I’ve got my money where my mouth is. A hundred grand, with anybody. I put it on Tommy. And that’s it. That’s how I feel about it.”

Jake Paul would ridicule the heavyweight champion a bit, before trying to raise the stakes. “Hey Tyson, you f*cking p*ssy,” He said. “You made $40 million (last year), I know it wasn’t as much as me. But, let’s up the ante. Let’s bet $1 million on it, Tyson. $2 million, $3 million. However much you want to f*cking bet, let’s do it.”

Jake Paul and Tommy Fury are scheduled to fight on August 6th. It is widely believed to be the biggest challenge of Paul’s career, and a loss against young Fury would halt the steady progress Paul has been making within the Combat Sports world.

If you had $3 million, would you bet on Jake Paul or Tommy Fury?