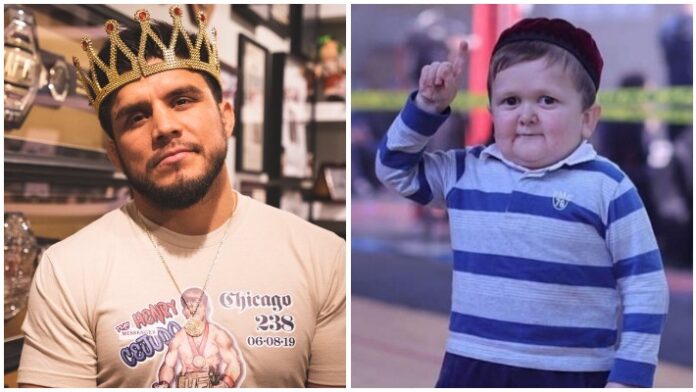 Henry Cejudo has backed Hasbulla Magomedov to become “a huge recognisable public figure across the world.”

The 18-year-old has childlike characteristics such as stunted growth and a high voice which is believed to be caused by a form of dwarfism. Hasbulla has become something of a social media celebrity off the back of a mock press conference ahead of his proposed fight with Abdu Rozik.

Former UFC dual-weight champion, Cejudo, is often mocked for his short stature. ‘Triple C’ was called out by Hasbulla because they are a “similar size”. Cejudo has played along with the joke and has been interacting with Hasbulla online.

The Olympic gold medallist believes the Russian social media star can become one of the most famous people in the world.

“He wants to come over to the US Hasbulla has big plans. He wants to fight in Vegas. He’s been sending me messages, so we’ll see,” Cejudo said on the Real Quick With Mike Swick Podcast.

“I don’t take myself too seriously. It is what it is,” Cejudo added. “Even my girl is like four inches taller than me too… It’s just the sense of humour. I’m looking for different ways to troll. I see the business aspect, the business side of it.”

“I can see Hasbulla becoming a huge recognisable public figure across the world. If Hasbulla plays his cards right, he could be one of the most recognised faces in the world because how can you not like that guy,” Cejudo concluded. “The dude has… I don’t what the syndrome is but he’s 18 or 19 years old, but it looks like he is five or six.” (Transcribed by SPORTBIBLE)

READ MORE:  Leon Edwards targets first title defense against Jorge Masvidal in the UK: "I'll give the bum the opportunity"

Do you agree with Henry Cejudo? Does Hasbulla Magmedov has what it take to become a global superstar?