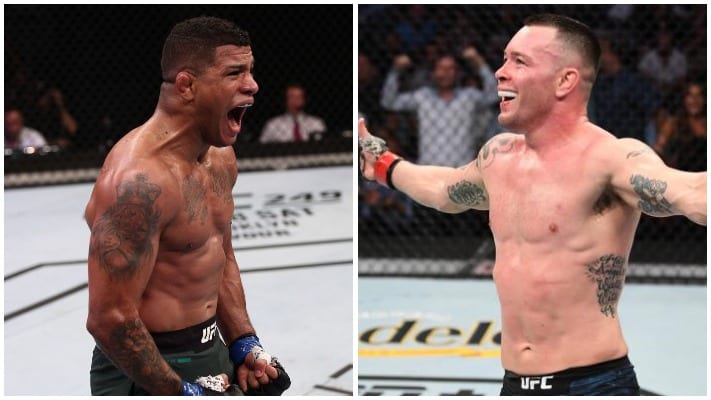 Gilbert Burns is already planning his route back to another welterweight title shot.

‘Durinho’ got his long overdue fight with Kamaru Usman at UFC 258 this past weekend.

The Brazilian started well, dropping the champion in the first frame.

Usman rallied in round two and inflicted some damage of his own.

‘The Nigerian Nightmare’ continued to pour it on in round three before forcing the referee to step in and wave off the fight.

Just a few days on his title defeat, Burns is already thinking about who he’ll fight next and one particular welterweight contender is at the top of his mind.

“At first, when I got back to the hotel, I was already thinking, ‘OK, I want to fight Colby next,’” Burns told MMA Junkie. “Then Colby is fighting Leon Edwards. ‘OK, give me Michael Chiesa.’ The names were going. Maybe ‘Wonderboy.’ But to be honest, right now I don’t know. I just saw Colby-Leon I don’t think is going to happen. That was the one that should happen. We’ll see. Now we’ve got some time, especially with the whole division laid off like that. It looks Kamaru is going to fight (Jorge) Masvidal.

“One fight and back to the title would only be Colby Covington,” Burns added. “That’s the only one. Or Leon Edwards, if until May he doesn’t get another opponent, and then I fight him. That’s the fight. So I don’t know who I want. I want every single one of these guys. I’ll fight Khamzat. I’ll fight ‘Wonderboy.’ I’ll fight Michael Chiesa. It depends. If the UFC says you need two fights, then I’ll be a little bit behind on the rankings and then a guy up front on the rankings, but if they say one fight, OK, give me Colby Covington.”

Do you want to see Gilbert Burns fight Colby Covington?