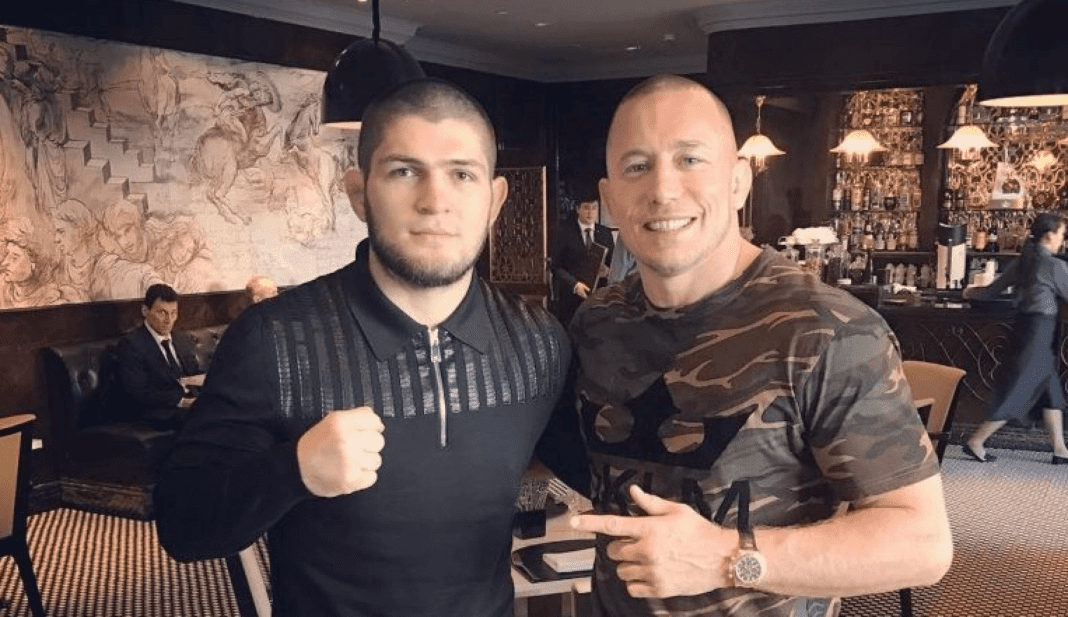 St-Pierre talks about his reaction to Khabib’s retirement after his win at UFC 254, “I was in the same boat as everybody, I thought maybe he would have called me out to maybe pressure the UFC to organize the fight.”

“It doesn’t mean I would have accepted, Everybody says, ‘Oh, when is it going to happen?’” St-Pierre said. “I never said I wanted to do it. It depends (on) the conditions too. I could think about it seriously if the conditions are right in terms of the weight class and all that, but there’s no way I’m gonna go down to 155 now. I’m 39 years old and this is out of the window”

“We’re both about the same size. I’m not gonna lie. I wake up in the morning and I’m about 183 pounds. I’m sure he’s about the same weight as me if not probably bigger. So I think the weight class — it’s like a novelty fight, a superfight — you need to stipulate the rule maybe no weight class or maybe (that) you cannot be more than three percent different in terms of weight. I don’t know but there’s ways to do it. You don’t have to cut weight and damage yourself to do something like that.”

“If in a hypothetical world this fight would happen, I think I would need to use all my tools,” St-Pierre then goes on to explain. “I’m good at what I do and it’s not because I’m fighting Khabib that I’m gonna change my way of fighting. The way I fight, that’s how I’ve been successful all of my career. I think the mistake that a lot of guys are doing when they fight Khabib is that they change the way they’re fighting because Khabib is very known to be probably the best wrestler in the sport. (But) I’m good with the takedown, to mix it up. It’s not because I’m fighting Khabib that I’m not gonna mix it up with him. If I have a chance to put him down, I’m gonna try to put him down. I believe in my chance to put him down and I’m confident in myself. I think confidence is a very important piece of the puzzle in MMA to be successful and I believe a lot of guys when they fight a legend fighter status, part of that confidence and their skill goes out the window. That’s one of the mistakes I would not do because I know Khabib would not do it against myself.”

“If the UFC would want me back, it’s not me that would try to go and beg for a fight. ‘Hey please, can I come back?’ They’re gonna lowball the sh*t out of me!” St-Pierre said. “It would be the most stupid thing I could do. If they have an offer to make to me, an offer I cannot refuse, Dana knows where to reach me.” (Transcribed by MMAFighting)

Would you like to see Georges St-Pierre vs Khabib Nurmagomedov one day?