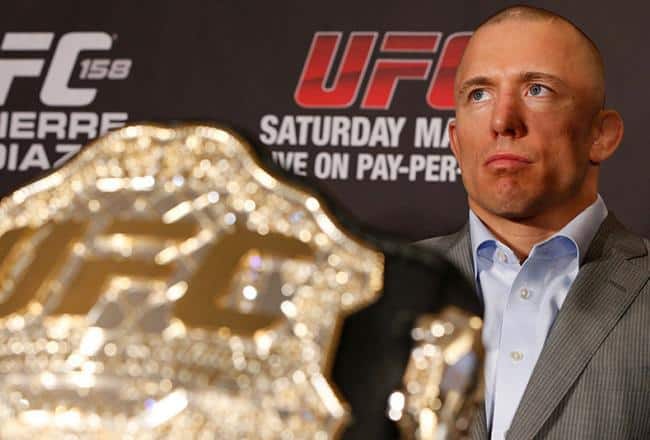 Through the majority of 2016, legendary former UFC welterweight champion Georges St-Pierre has hinted at his long-awaited return to the Octagon as the three-year anniversary of him vacating the 170-pound belt following his highly controversial split decision win over Johny Hendricks in the main event of UFC 167 draws near.

”Rush’ has often hinted he would come back to Ariel Helwani on The MMA Hour, but contract holdups seemingly put the deal on the backburner. He was also rumored to be returning to make his comeback at December 10’s UFC 206 in Toronto, yet UFC President Dana White repeatedly proclaimed he didn’t have the fire to compete with the best any longer.

But today (Mon., October 17, 2016) GSP returned to The MMA Hour to reveal his plans had taken an unexpected turn down a new road:

St-Pierre detailed the timeline of events that lead to his decision, with the oft-rumored disagreements with previous UFC owner Lorenzo Fertitta playing a part in the proceedings:

“Well, what happened is, last February, I told Lorenzo that I wanted to fight again. We had a meeting in Las Vegas, and I came with my agent and I told him that I wanted to fight again, and since February my team was in negotiations with Lorenzo’s. Many name were offered at different dates – UFC 200, New York – but we felt the best date was the Toronto date, so that’s one of the main reason I entered the USADA testing, you know to have my four months prior testing. We had up and down; it’s not always been as good. All negotiations are, it doesn’t end up in only an hour.”

The fight game has certainly changed in his absence, but St-Pierre detailed a scene where the UFC told him they would have to take great financial risk to re-introduce him, something that doesn’t seem exactly accurate given his still-vast fanbase and track record in the Octagon. Still, an agreement neared, that is, until talent group WME-IMG bought the UFC for a record-setting $4.2 billon and things soon changed:

“We had some agreements, some disagreements, you know, and I remember even at some time UFC told us that they would take a huge financial risk to have me back and they would need to spend a lot of money to re-introduce me to the new audience. So just to tell you what mindset they were and what mindset we were, and what we asked for, trust me, is really reasonable. So the negotiations, we were making compromise on both side, I think we were close to an agreement at some point toward the end until big news arrived, and the news was that the UFC would got sold. New owners, and we were told that everything was put on ice until the new owners take charge.”

The UFC legend then dove into the back-and-forth battle between his team and the new UFC owners, with precious little revelant information reportedly being divulged on their part as White spoke down about him in the headlines:

“So we waited for weeks without any news from the new owners. Finally the news comes, and we were told Lorenzo’s offer was off the table. It was like a shock to us, because we felt like we were making progress; we’re almost there. And when they told us that, I got angry. I talked to my advisor and I hired the best lawyer in the business – his name is James Quinn. And James Quinn gave them a legal deadline, because I already have a contract with the UFC, it’s a 2011 contract. He gave them a deadline to give me a fight because I wanted to fight.

“Even during that deadline, we didn’t have any news – no emails and I was always waiting for phone calls, and I hear during that time Dana was saying to the media that I didn’t wanna fight, that I didn’t have it in me so I know it’s probably a strategy on his part, but I didn’t have any news until the last day of the deadline very late at night, believe it or not. And we received four letters saying they were supposed to schedule us a fight. That’s what we were waiting for, but I received a letter saying, ‘Oh, if if I would be interested in fighting Robbie Lawler sometime.’ And I knew that Robbie Lawler pulled off of New York card, because of, I don’t know the reason but I saw the interview and he said he needed a long break. So the next day my lawyer said, ‘You’re a free agent. You’re free.’ So that’s how it happened.”

Then, with the MMA community struggling to gather their collective breath, St-Pierre summed up the current financial climate in fighting with one simple yet powerful quote:

St-Pierre was briefly linked to a super fight with featherweight champion Conor McGregor, an obviously massive bout where he reportedly asked for million to participate in. The UFC was rumored to have balked at the prospect, even though the bout certainly had the potential to be the biggest MMA fight of all time.

But with the new UFC owners allegedly thinking him to be an afterthought rather than a bankable draw at this stage, the greatest 170-pound talent in MMA history could legitimately be headed for the UFC’s only semblance of competition in Bellator, where his good friend and protege Rory MacDonald recently departed to after his UFC contract had run out.

That’s probably not something you expected to hear, and it would no doubt be the biggest catalyst for change in the current heated MMA climate where the UFCs treatment and compensation of fighters is one of the most discussed topics in the sport.

Do you agree with GSP’s decision to leave the UFC?