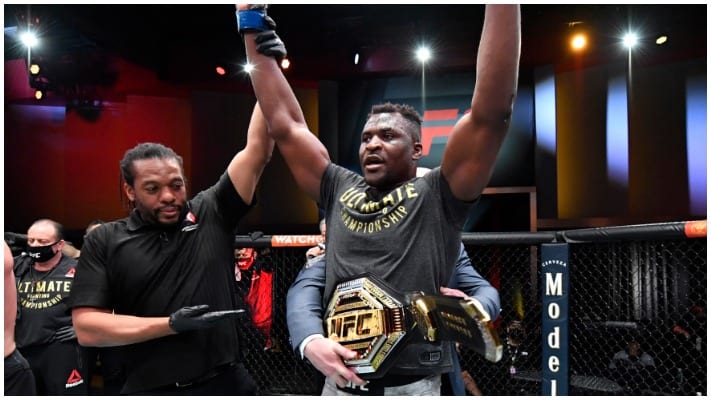 Francis Ngannou is hoping the first defence of his heavyweight title will come against Jon Jones.

The 34-year-old was even able to win some wrestling exchanges before going to work with his hands in round two.

Ultimately, Ngannou knocked Miocic out cold in the second stanza to avenge his first professional loss and become the UFC heavyweight champion.

Speaking at the UFC 260 post-fight press conference, Ngannou made it clear who it wants to fight next.

“Obviously, Jon Jones makes more sense for me,” Ngannou said. “Either way, I’m going to fight. If Jon Jones doesn’t come to heavyweight, the division has to move. As the new heavyweight champion, I decided to move on (and) put more activity in the division than it has in the past two or three years.”

Earlier this week UFC president Dana White said it would be hard to deny Miocic a rematch if he lost because of the immense championship run he was enjoye. Ngannou though, doesn’t see the need to run the fight back straight away.

“Personally, no, I don’t feel a need (right now),” Ngannou said. “He said I won’t be a champion until he’s retired, so maybe he’ll retire. But if not, I’ll still be down to fight him. I lost against him and he stands as the greatest heavyweight of all time, so it makes sense for me just to fight him if needed.”

Whatever happens Ngannou plans to be a very active heavyweight champion.

“I never asked (for) less (fights),” Ngannou said. “I always asked to be active. I hope with the belt now, I’m going to be more active. I’m going to be able to do two or three fights a year. That’s my intention moving forward.” (Transcribed by MMA Junkie)

Do you want to see Francis Ngannou vs. Jon Jones next?