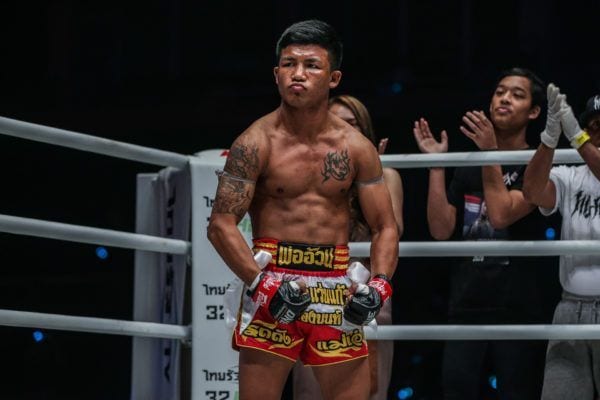 ONE Flyweight Muay Thai World Champion Rodtang “The Iron Man” Jitmuangnon started 2020 with a bang after dismantling Johnathan Haggerty in the third round of their January title fight at ONE: A New Tomorrow.

Shortly after Rodtang’s victory, talk switched to when the Thai would attempt to add a second strap to his waist by challenging the Netherlands’ Ilias Ennahachi for his ONE Flyweight Kickboxing World Championship.

However, this fight, along with many others, has been put on the back-burner due to the ongoing cornoavirus pandemic. Roadtang has now found himself in the unusual position of not having any bouts scheduled.

“I’m really waiting for it,” Rodtang said to LowKickMMA when asked about his desire to return to competition.

“Currently, I’m back to training again after stopping for a month. It’s kind of something different to me as I usually always have a fight, but I totally understand the situation, and I hope Covid-19 will end soon and everything will be back to normal. “

With over three hundred fights to his name, the lack of in-ring action is somewhat of a novelty for the Phatthalung native. Thailand is currently in a state of lockdown, and so Rodtang, like fighters the world over, is having to adjust to training at home.

“Yes, I have to, as my gym is closed now, so I do some shadow boxing as well as jogging, as jogging is the easiest way to keep myself fit and in shape, I usually jog in the evening about 20-30 mins, plus any of my fans can follow me too, it’s very easy and free-of-charge.”

Once ONE is back up and running, Rodtang is setting his sights on acquiring the ONE flyweight kickboxing strap.

“Yes, of course! I’d love to do that. Ilias is one of those on the top of my list as well. It’s going to be exciting.”

Japanese star Tenshin Nasukawa is another name on that list. The pair first meet in 2018 at RISE 125, the six-round bout ended with Nasukawa getting his hand raised after he received the nod from the judges.

“Yes, for sure, I don’t mind competing with him again. Actually, I’m ready to compete with anyone,” Rodtang said.

Nasukawa is not under the ONE umbrella, so, for now, it’s a fight best shelved under the category of dream matchups. Still, if it could be arranged, a rematch between the two would attract huge interest from fans and media alike.

Rodtang has also recently expressed interest in following in the footsteps of his partner and ONE Atomweight Muay Thai World Champion Stamp Fairtex and compete in an MMA bout.

“My first time trying MMA was at Fairtex, Pattaya, I was invited by Stamp Fairtex, as she was training that time and I joined the class with her, it was fun. I always watch all the fights of ONE Championship, not just for fun but also so I can learn some techniques from many athletes and improve my skills as well.”

Rodtang’s striking is world-class, and if he could develop a solid ground game, he could pose a real danger to anyone in the ONE MMA flyweight division.

Thankfully, time is on Rodtang’s side, and, provided he stays injury-free, the “Iron Man” will likely be entertaining fans for years to come.

Who do you think Rodtang should face next?