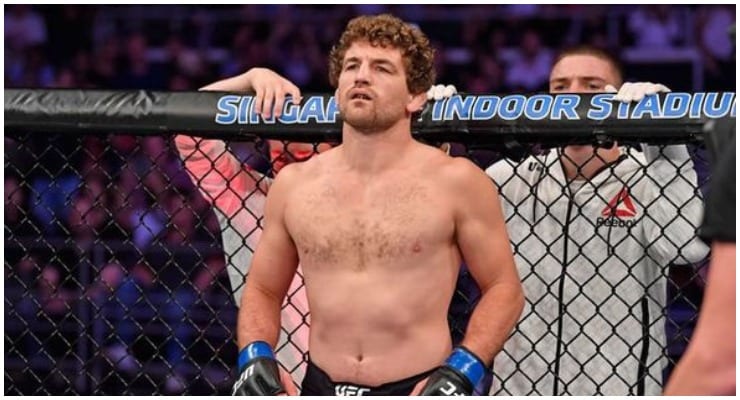 Ben Askren has taken time out of his busy schedule to speak exclusivley with LowKickMMA to reflect on his career and talk about his life after fighting. ‘Funky’ also gave us his opinions on the current landscape in the UFC’s welterweight division

The 35-year-old wrestler enjoyed a brilliant MMA career which saw him go undefeated for 10 years amassing a perfect 19-0 record between 2009 and 2019. After moving to the UFC in late 2018 he went 1-2 in the organisation before retiring due to a persistent hip injury which had hampered his training and fighting.

Despite being forced into an early retirement Askren is enjoying his time away from the sport. The former Bellator and ONE Championship titlist has plenty to keep him busy including the Askren Wrestling Academies which he runs with brother Max. Speaking about life ather fighting he said.

“Retirement is great. I feel like I’m fully putting myself into my business ventures and I’m having a lot of fun doing that. I’ve a bunch of podcasts, wrestling academies, we own buildings and have just launched the Rokfin platform. So yeah, a whole bunch of things going on.”

“My brother and I are opening academies number four and number five this year. That’d be March and April. So, we’re having a lot of fun doing it. We just had high school states, we had a whole bunch of state champions and we really love it. It’s probably the most favorite thing I do, the Askren Wrestling Academy as I’m coaching and helping kids.”

Away from wrestling Askren takes a keen interest in crypto currencies which he thinks will eventually displace the financial system in place today – he even has a podcast on the subject.

“Bitcoin is significantly better than the current financial system. So it’s going to succeed in the long run, I believe. I do, I just see the value in it. You guys can just check out. I have four podcasts on Rokfin, it’s called a Funky Crypto Show. And we go into a lot of these really basic facts. That’d be a great place for you to check that information out.”

Another passion of Askren’s is Disc Golf which by his own account he was pretty good at back in his day. Now ‘Funky’ hopes to help grow the sport and get his kids into it, he said.

“I got into it my freshman year in college at Missou, a lot of people played it. I just got addicted to it. I loved it. I ended up taking ninth in the amateur worlds twice. I took second at amateur nationals. It was so much fun. It’s gonna keep growing. I’m building a course on my property. I’m getting to know Paul McBeth who’s the GOAT in disc golf. I’m hoping my kids get into it.”

Less than a year since his retirement Askren still seems frustrated by how his career came to a close. Despite being annoyed by his two losses, Askren was able to look back and reflect on the best moments of his career saying.

“I always say this, you’re only as good as your last moment.  I had a lot of great moments. Obviously, I went undefeated for almost a decade. I retired on top.  I took out Shinya Aoki. A legend the sport in less than a minute in my retirement. That was such a high point obviously.

Away from his own career we asked Askren what he made of the rumoured UFC welterweight title fight between champion Kamaru Usman and former opponent Jorge Masvidal – who strangely he might be cheering for come fight night.

“I don’t know why they haven’t booked that yet. It feels like they’re going to do it at international fight week. They’ve kinda chatted about that so I think it’s going to happen. I think I lean towards Usman, but I don’t know who I cheer for. I don’t really like either one of these guys.  I don’t know Usman is the most annoying, so maybe I would even cheer for Masvidal with that. That feels really strange. But who knows?

One man Askren will never be cheering for is Colby Covington. The now retired UFC welterweight doesn’t believe ‘Chaos’ is playing a character, he’s just not a good guy according to ‘Funky’ who said.

“Well, I think he’s a terrible person. I think that’s pretty well established, kinda anywhere he’s been people can’t stand him. I think that’s now being established at American Top Team and as a fighter. Well he’s pretty good. He almost won a world title. He does a pretty good job at promoting himself. Although, you know, some people think its an act, but it’s not an act. He’s really that much of a dipshit in real life.”

Do you agree with Ben Askren or is Colby Covington acting?