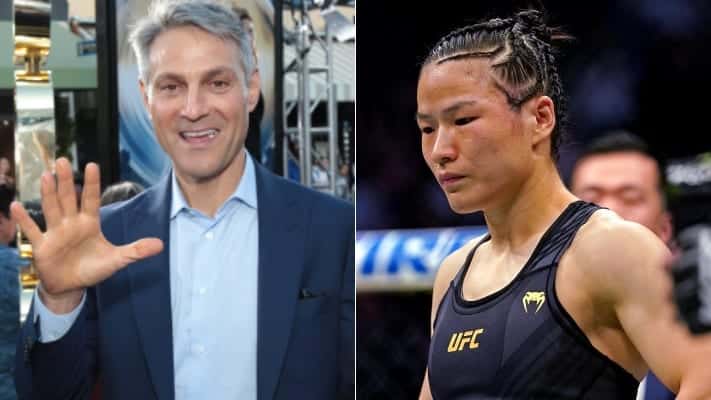 The UFC went public on Thursday, which, unfortunately for Endeavor CEO Ari Emanuel, led to a very public slip-up.

The UFC owner was discussing the company’s decision to go public and the hugely successful UFC 261 event. The card was co-headlined by the UFC’s first Chinese champion, Zhang Weili. However, Emanuel didn’t appear to know who she was (H/T MiddleEasy).

“Well, here’s what I would say to you, even during the pandemic—we didn’t have live audiences, we didn’t have commercial PPVs—we beat our EBITA [earnings before interest, taxes, and amortization] number by 10 percent,” Emanuel told CNBC.

“Now with the re-opening, you just saw we had live audiences for the first time. In Houston, we’re going to have a live audience. In July we’re having another live audience. Our direct-to-consumer business on Fight Pass is up 40 percent. Our commercial numbers and marketing numbers are up. China is going to be bigger than ever.

“Actually, because of the fight—even though our Chinese champion lost, Li Na—there was over a billion video views out of China.”

If you’re wondering who Li Na is, don’t worry, you’re not alone. There is not – nor has there ever been – a Li Na on the UFC roster. However, it’s possible that Emanuel did confuse Zhang with Liang Na, though how he could mix up a headliner and champion with someone who fought in the very first fight on the card is anyone’s guess.

The one thing Emanuel did get right is that the Chinese champion did in fact lose her title at UFC 261. Coming off a ‘Fight-of-the-Year’ favourite against Joanna Jedrzejczyk, Zhang was felled by a Rose Namajunas headkick early in the first round.

Immediately after the loss, Zhang expressed interest in a rematch against Namajunas, something that seemed to peak the interest of Dana White. Whether that fight actually comes to fruition remains to be seen. If Emanuel will know who Zhang is by then is an entirely other question.

Do you think Ari Emanuel knows who Zhang Weili is?