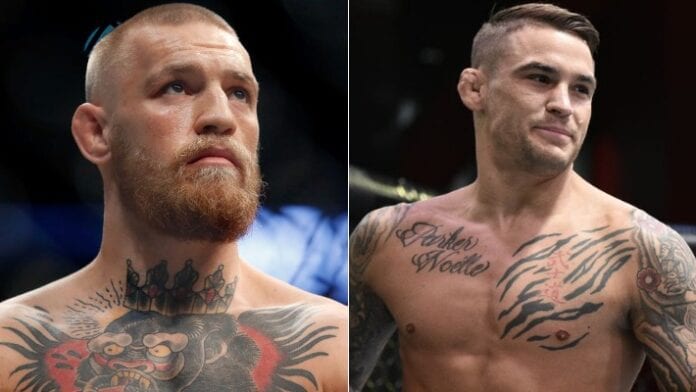 Dustin Poirier is facing off against Conor McGregor on January 23rd at UFC 257. The fight sees the two square-off in a hotly anticipated rematch, which has been six years in the making. ‘The Diamond’ believes he has the perfect game plan to dismantle the Irishman. The game plan: violence, lots of violence.

The first fight between the two lasted less than two minutes, with McGregor winning via TKO at UFC 178 in 2014. However, both fighters have improved since and gone on to secure impressive resumes. McGregor, of course, became the UFC’s first-ever ‘Champ Champ’ through holding the UFC featherweight and lightweight straps simultaneously. Whereas Poirier was busy racking up seismic wins over Eddie Alvarez, Justin Gaethje and, most recently, Dan Hooker.

Poirier’s game plan is certainly not one of caution. Revealing to Theo Von on The Past Weekend, Poirier feels like the first bout wasn’t really a fight. This time round he plans on dragging McGregor deep into the trenches early.

“If you’re talking about a game plan, what I want is for both of us to be dripping blood and hurting and suffering early in the fight, then we can find out who’s the real fighter,” Poirier said. “That’s what I want. I want to be bleeding with a minute off the first round clock.”

This game plan of engaging in an all-out brawl with McGregor is really interesting but bizarre, in my opinion. McGregor has been known for being a fast starter, whereas Poirier seems to take a little bit more time to get into the groove of a fight. This sentiment is reiterated by John Gooden and Dan Hardy on a recent episode of Inside the Octagon. This leaning into McGregor’s strengths seems like a huge risk. However, anyone can get caught under those big bright lights.

McGregor won’t be able to last when things get tough due to his comfy life and business success, allegedly. Poirier claims that McGregor’s success outside of the Octagon means that he might not want to win as much as the Louisianan.

“I want us both to be bleeding and really have to dig down and see who’s the better fighter, and see who really wants to be in there, because I don’t have a safety net,” Poirier said.

Poirier is one of the best fighters in the UFC’s most stacked division. His elite boxing skills and heart of a lion makes him a formidable opponent for anyone to come up against. That being said, McGregor looks to be in the shape of his life and looks to be as hungry as ever to climb up the mountain and raise UFC gold once again.

This has all the makings of a legendary fight.