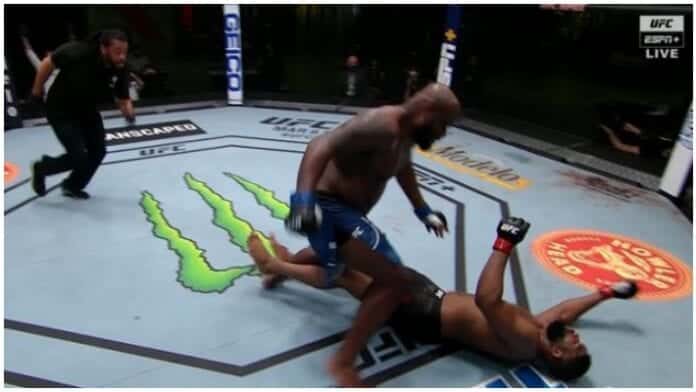 Derrick Lewis scored a Knockout of the Year contender in the UFC Vegas 19 main event.

‘The Black Beast’ caught Curtis Blaydes with an uppercut as the elite-level wrestler dipped down for the takedown. Blaydes was clearly out but that didn’t stop Lewis who landed two huge strikes as his opponent lay motionless on the mat before referee Herb Dean was able to call the fight.

At the UFC Vegas 19 post-fight press conference, Lewis told reporters that he is not programmed to stop unless the referee tells him to do so.

“I can’t just turn the switch off just like that,” Lewis said. “Some fighters can do that, but I can’t do it. I have to wait until the referee pulled me off because you never know what could happen. Anything could happen. He could’ve turned into (The) Undertaker and stood straight up and eat all those shots. You never know. You go until the referee says, ‘Chill out.’”

Blaydes got off to a good start and clearly won the first round.

Lewis says he remained calm despite the fact the fight was not initially going his way.

“At the end of the first round I’m like, ‘He’s messing up, he’s messing up,’” Lewis said. “That’s what I was saying in my head. His coach was trying to pump his head up, ‘Good, good. You’re doing good.’ I’m like, ‘All right, keep playing that game.’ That’s what I was saying to myself. The second round came, and I knew he was going to try to come out and stand up a little bit, and then he was trying to shoot. So I just had to be patient.”

The picture-perfect uppercut ties Lewis with Vitor Belfort for the most KO wins in UFC history.

‘The Black Beast’ says the punch was something he and his team had been working on throughout camp.

“All I was waiting on was just for him to shoot,” Lewis said. “Was just waiting for him to shoot and nothing else. We knew it was coming. … (My coaches and I), that’s what we’ve been drilling all month. Twelve weeks, really. Trying to get prepared for that guy.” (Transcribed by MMA Junkie)

Do you think Derrick Lewis should have held back once he realised Curtis Blaydes was out cold?