LowKickMMA.com
Home UFC News Darren Till Reveals The UFC Offered Him A Fight With Sean Strickland 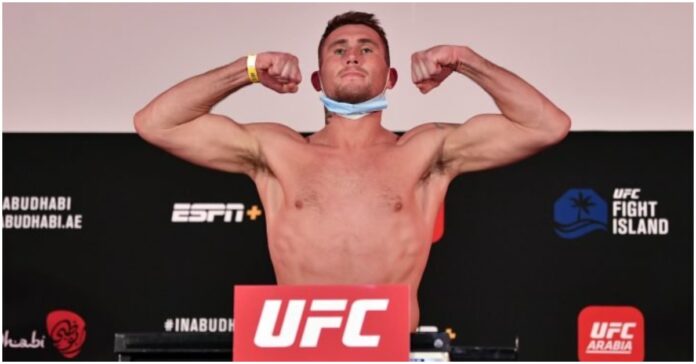 Darren Till has revealed that the front runners from the UFC are Sean Strickland and Jared Cannonier.

Since his lone title shot at welterweight against Tyron Woodley at UFC 228, ‘The Gorilla’ has gone 1-4. It is a run that has included losses to fan favourite Jorge Masvidal by knockout, and former UFC middleweight champion Robert Whittaker by unanimous decision.

Speaking on the former UFC middleweight champion and fellow Englishman Michael Bisping’s podcast “Believe You Me, revealed that he asked for Cannonier to be his next opponent before the UFC sent him a list of potential opponents that included Strickland.

“Listen, the UFC, they told me, ‘hey Darren, let us know when do you want to fight because we are waiting on you. You’re always there for us, you’re always ready to fight anyone, anytime’ so I said Jared Cannonier is a good one and they said ‘oh really? Jared already.?’ So they offered a few fights, and one fight I really liked was Sean Strickland,” Till said. “I’ve actually seen Sean Strickland a few times and I said to Sean, “do you know if you want to get it on sometime, we can do it because I think you’re a really good fighter.”  (Transcribed by Sportskeeda)

Till is coming off back-to-back losses with his most recent being a submission by rear-naked choke from Derek Brunson.

Strickland is on a five-fight win streak with his most recent victory being his most impressive, as he beat Uriah Hall by unanimous decision.

Chael Sonnen doesn’t believe that Darren Till is done at middleweight, Sonnen believes that a match between Till and Middleweight champion Israel Adesanya would be an interesting bout, with both fighters being strikers and with little tendencies for takedowns the fight would surely be a slugfest.

Speaking on his Youtube Channel the “Bad Guy” added “one of the reasons I’m not willing to dismiss Darren Till. Till did not have his ideal performance and definitely did not have his ideal outcome against Derek. Till offers something to Izzy and you must get the blessing of Adesanya. If any guy has proven that, it’s him.”

Should Darren Till move back down to welterweight?