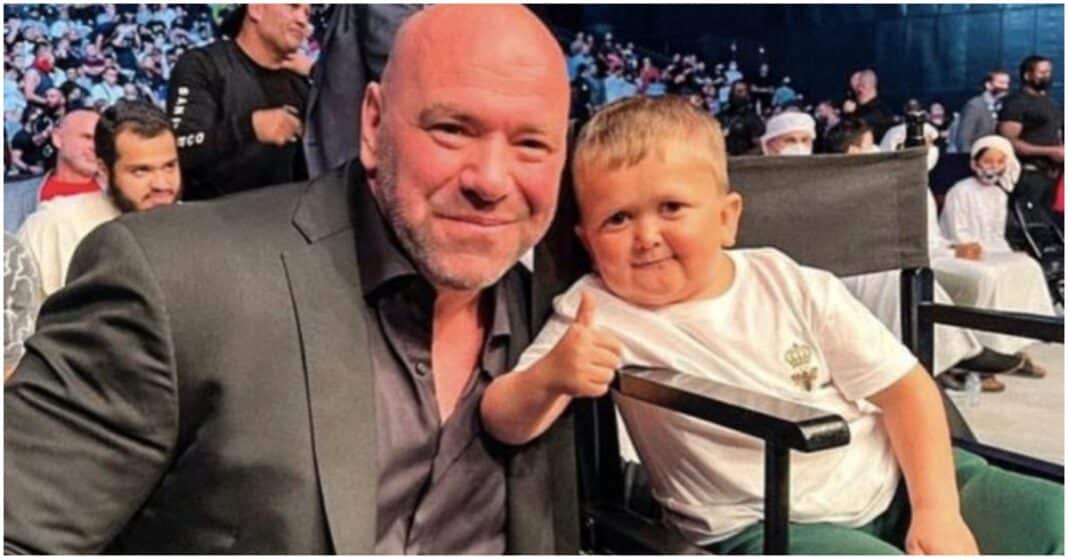 Dana White has refused to totally rule out the prospect of Hasbulla Magomedov getting a fight inside the Octagon.

The social media sensation suffers from a form of Dwarfism, a body disorder in which adults exhibit the physical attributes of a child. Despite that, Hasbulla has become one of the most recognizable people on earth, especially in the world of combat sports.

‘Mini Khabib’ gained widespread media attention off the back of a mock press conference ahead of his proposed fight with Abdu Rozik, who also suffers from dwarfism. The two were both in attendance at UFC 267 and stole the show when they clashed following the conclusion of the main event of the evening.

Since then, direct messages from Dana White have been leaked and they appear to show that the UFC boss is interested in staging the Hasbulla vs. Abdu fight.

During a recent interview with Robbie Fox of Barstool Sports, White did little to dispel the rumours about Hasbulla fighting for his promotion. The UFC president seemed totally in awe of the viral superstar and the amount of attention he was able to bring to UFC 267.

“So I’m going to tell you something. So the video that he sent saying ‘Dana White I’m coming to Abu Dhabi and UFC’, so when I posted that with me on the plane saying ‘I’m coming’, it’s the biggest post that I’ve ever posted.” White said. “I have 6.7 million followers on Instagram, 6.4 million people watched that video. Is that f*cking crazy?!”

White was then asked how his meeting with Hasbulla went and if there is a chance we will get to see him compete inside the Octagon.

“Incredible,” White said of the meeting. “I love the kid. Is there more than a zero percent chance? Yes.” (Transcribed by BJPENN.com)

Do you think Dana White is seriously considering booking Hasbulla in a UFC fight?