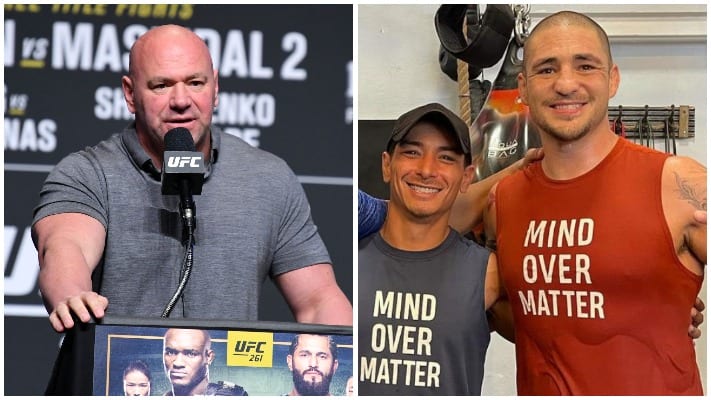 Dana White is unsure if Diego Sanchez will return to the UFC for one final fight following his very public split from Joshua Fabia.

The Ultimate Fighter Season One winner was cut last month ahead of his proposed retirement fight against Donald ‘Cowboy’ Cerrone at UFC Vegas 26.

Sanchez’s controversial coach/manager, Joshua Fabia, quickened his client’s departure from the UFC when he requested all the medical files relating to Sanchez, causing concern amongst UFC staff that ‘The Nightmare’ could be suffering with a medical issue heading into his final fight. Sanchez was asked to confirm he is fit to fight by the UFC but refused to do so on the advice of his lawyer. The UFC Hall of Famer was cut by the promotion soon after and Cerrone instead fought Alex Morono at UFC Vegas 26.

In the days following his UFC release Sanchez stuck by Fabia and even spoke out against the company. The 39-year-old suggested he feared for his life after taking on a multi-billion-dollar company.

The relationship between Sanchez and Fabia has soured over the last week. Sanchez cut all professional ties with Fabia who has since come out with a slew of accusations towards his former friend who he claims has a drug problem and threw his fight against Michael Chiesa.

In an interview with Kevin Iole, Dana White insisted he hasn’t been paying any attention to the Sanchez – Fabia saga but maintains anytime ‘The Nightmare’ needs him, he’s just a phone call away.

“I haven’t really paid attention to any of that. I don’t care what that guy says. This is one of those things, I was just telling the media the other day. Every time you guys asked me about the Triller guys, it’s like, come on, you want a reaction from me, that’s what you’re looking for. I feel the same way about this kid. All you guys know this kid’s bat sh*t nuts. If Diego needs me just like the last, however many years. Diego’s never been that needy guy. I did see where he came out and said, ‘I’ve been trying to talk to Dana.’ Diego Sanchez can pick up the phone and call me, (it’s the same with) any of those TUF kids. I had a falling out a few years ago with Josh Koscheck. If Josh Koscheck picked up the phone and called me, I would talk to Josh Koscheck. If any of those kids needed me all they gotta do is pick up the phone and call me. Diego Sanchez, this will always be his house. He will always be a part of the history of this company and as long as I’m here he’ll always be respected for what he’s done for the UFC and the Ultimate Fighter.

Despite the fact Sanchez has now parted with his troublesome coach, White is unsure if he’ll offer the UFC veteran a route back to the Octagon for one final fight.

“I don’t know,” White said. “I honestly don’t know. Even when we were doing a farewell fight I didn’t love it. I didn’t love the fact that he’s still fighting, but no matter what I do, if I let Diego go he’ll probably end up somewhere else. That’s what I was thinking at the time and I love the kid. He wanted one more fight, I was going to give it to him and then all hell broke loose, and here we are today.

Do you think Dana White should offer Diego Sanchez on final UFC fight?