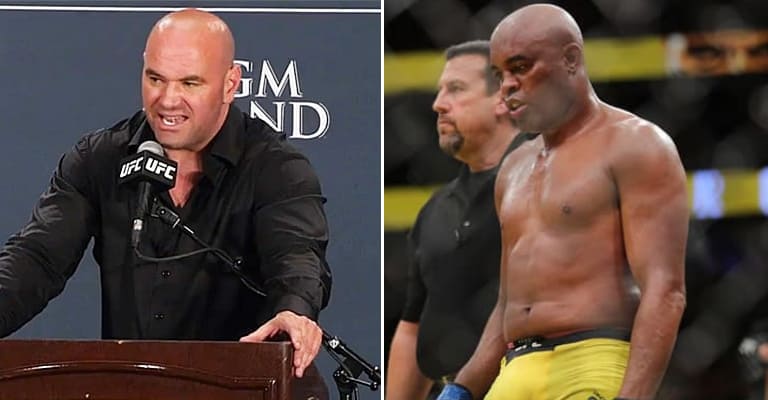 UFC President Dana White has dealt with Anderson Silva for over a decade, including Silva’s first failed PED test after his UFC 183 bout against Nick Diaz.

White was asked about Silva’s situation after a now second failed test leading into his canceled headliner against Kelvin Gastelum at UFC Shanghai and did not give much uplifting news regarding the disgraced former champion.

During a media luncheon in Las Vegas last week, White had this to say about Silva:

“Obviously (I was) bummed out. I was bummed out. I don’t know. They’ve been pretty radio silent. I talked to Ed Soares a couple times and he hadn’t even really talked to Anderson.”

Silva attributed his first failed PED test to some kind of erectile dysfunction medication he was given to by a friend. USADA and the Nevada State Athletic Commission (NSAC) didn’t believe him, and he was suspended a full year for his indiscretion.

His team recently gave a similar explanation this time around, claiming the ever-popular tainted supplement defense, but if the outcome of his first excuse didn’t work, it could be extremely unlikely that

The 42-year-old legend is likely facing a longer suspension this time around being that this is his second offense, and even though his team suggests that “The Spider” will fight on, he’s running out of time – and excuses – as PED-related issues cloud the end of his otherwise great career.

What do you think about Silva’s legacy? Will it be cast aside due to two failed drug tests, or will the fact that he was not caught during his nearly seven-year run as middleweight champion still lend him a spot amongst the best mixed martial arts combatants of all-time?