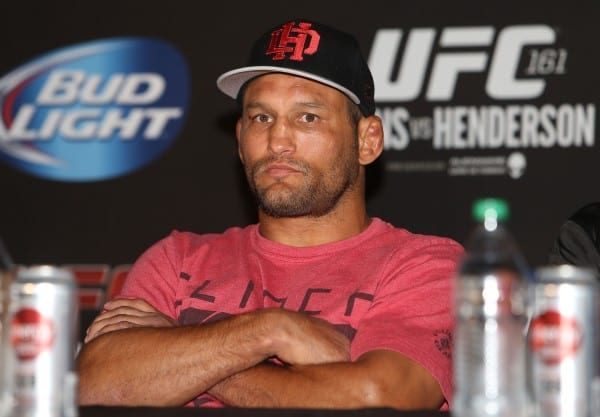 Last week news broke that former Pride and Strikeforce veteran Dan Henderson was targeting a move down to middleweight next January.

Today (November 12, 2014) his move was made official when the UFC issued a press release confirming that “Hendo” will face Gegard Mousasi in the co-main event to UFC on FOX 14’s Alexander Gustafsson vs. Anthony Johnson headliner on January 24, 2015 from the Tele2 Arena in Stockholm, Sweden:

The highly-anticipated Alexander Gustafsson vs. Anthony Johnson bout on January 24 in Stockholm, Sweden will see an equally intriguing co-main event, as Dan Henderson moves back to the middleweight division to face off with Gegard Mousasi in a clash of former Strikeforce champions.

The matchup, which will take place at the Tele2 Arena, was verbally agreed to on Wednesday. The event will be broadcast live on FOX at 8 p.m. ET/5 p.m. PT, with Prelims starting at 5 p.m. ET/2 p.m. PT on FOX Sports 1.

One of mixed martial arts’ most revered figures, Dan “Hendo” Henderson has been at the elite level of the sport since his debut in 1997, winning two PRIDE belts and one Strikeforce title along the way. Owner of victories over Mauricio “Shogun” Rua, Fedor Emelianenko, Michael Bisping, Rich Franklin, Vitor Belfort, and Wanderlei Silva, just to name a few, the 44-year-old former Olympian will return to the middleweight division for the first time since 2010 on January 24 to face Mousasi.

Unbeaten in Europe for nearly a decade, the Netherlands’ Gegard Mousasi is eager to fight in front of his loyal fanbase once again, and doing it against a legend like “Hendo” makes it even better for the talented 29-year-old. A former Strikeforce champion who has battled and beat the best for years, including Mark Hunt, Babalu Sobral, Jacare Souza and Ovince Saint Preux, Mousasi has picked up post-fight bonuses in two of his last three UFC bouts, and he’s hungry for more this January.

Henderson and Mousasi are both former Strikeforce titleholders who have seen better times. “Hendo” was most recently ragdolled by Daniel Cormier in the co-main event of May’s UFC 173, while Mousasi suffered a brutal submission at the hands of Ronaldo “Jacare” Souza at September’s UFC Fight Night 50.

Henderson’s loss to Cormier made it painfully clear that the aging legend needed to move down to 185 pounds in order to stay anything close to relevant, but he’ll have no easy task in Mousasi, a much younger fighter who also fought a large part of his MMA career at 205 pounds.

It’s an intriguing match-up that could be billed as a must-win for both win. UFC on FOX 14 is shaping up to be quite the event on European soil. Do you give the reeling Henderson a shot to rebound, or will “The Dreamcatcher” get back on track in Stockholm?