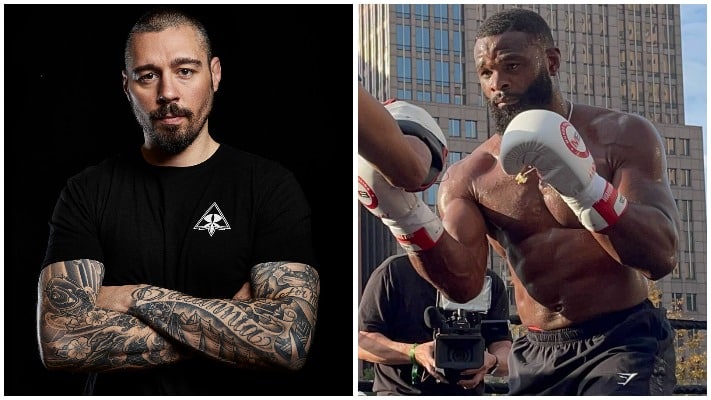 The former UFC welterweight title challenger hasn’t fought since 2012 after being diagnosed with a heart condition known as Wolff-Parkinson-White syndrome which appeared to bring a premature end to his fight career.

Hardy is now able to fight again and has been talking up a return to the Octagon for some time now. Unfortunately, the Englishman’s relationship with the UFC recently went south, leading to his firing from broadcast duties and ultimately his release from the promotion entirely.

One potential opponent Hardy appears to be interested in is Tyron Woodley.

“There’s also a couple of boxing options as well, but until the right opponent’s offered that really kind of tantalizes me, then I’ll wait,” Dan Hardy told Submission Radio. “Maybe if Tito beats Anderson Silva this weekend I’ll fight Tito. I’d fight Tyron Woodley if he fancied it as well. He looked like a sack of shit the other week. That was very embarrassing.”

Hardy was not impressed with Woodley’s performance against Jake Paul.

“I think Jake Paul’s not very good and I think he did what he could to minimize the damage that he would take from Woodley in the early rounds and then played a smart game throughout the later rounds. And I think he knew that would be the way to beat Woodley, which is why he accepted the fight,” Hardy said. And I think Tyron Woodley was being himself. How many fights have the fans been booing in the third, fourth and fifth round? He hangs back, he waits because he’s got 10 punches in his pocket, and if he throws any more than that he’s blowing out of his arse. Like, that’s the reality of it. He was always going to be gun shy because he’s more afraid of getting tired and getting embarrassed by a YouTuber. Like, that was exactly what I expected to happen. And the reason I’m annoyed about it, is that he validated exactly what I thought was gonna happen, and I expected more from him. Like dude, you’re nearly 40, you’re rap game’s not going anywhere, you’re MMA career’s done, you’ve got a guy in front of you that’s been trashing your mom, that’s been talking a whole heap of nonsense for how many months? And you’ve got eight rounds to punch him in the face and you’re already half punching him through the ropes, and then you don’t put your foot on the gas because you’re afraid of being vulnerable? That just looks weak to me. It looks weak and it wastes people’s money. And I love all these weird and wonderful fights, but that’s when it runs out of steam. Like, that’s when the fire burns out, is when people tune in and they see that shitshow and they go, ‘oh, I won’t get it next time, because I’ll expect the same thing’.

“I’d rather watch Askren get knocked out again than watch that. And Askren wasn’t there to win, we all know that,” Hardy added. “I think what’s even worse is that Woodley was there to win and he didn’t try. And that must burn him. That was burning him in the post-fight interview. He could barely contain himself without calling him out before he finished his interview. It’s like dude, you’ve missed your opportunity, shut the fuck up and sit down and go and find something else to do, because you’ve just had your opportunity and it passed you by. And Jake Paul, fair play to him, because he is playing the game, he is mugging off the MMA world, left, right and center and he’s raising some really interesting topics about fighter pay. So, I’m finding myself more and more a Jake Paul convert by the day. I still don’t think he’s a very good boxer though.”

Do you want to see Dan Hardy vs. Tyron Woodley?