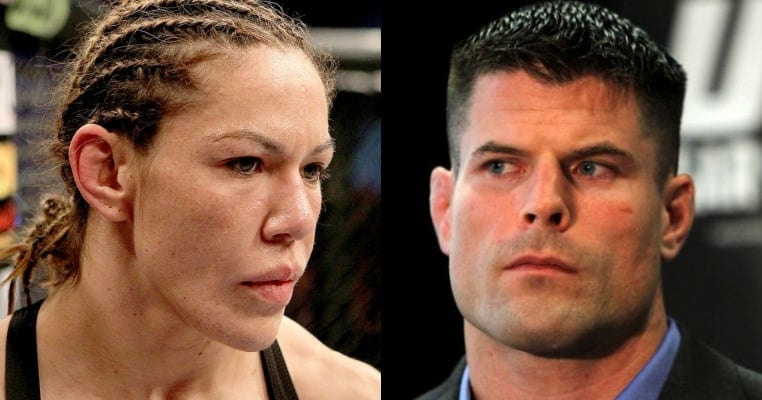 She may be considered by far the best pound-for-pound fighter in women’s MMA, but former Invicta FC featherweight champ Cris ‘Cyborg’ Justino hasn’t felt that success translate over into the Octagon just yet.

The dominant knockout artist has made as many headlines for her controversial weight cuts, drug test issues, and ongoing battles with the UFC as she has for her seemingly never-ending knockouts, and many believe she should be towards the top of MMA’s stars. According to Justino, who spoke up on Twitter recently, she’ll soon be on the sixth fight of her UFC deal, but more of those fights should have came in the world’s biggest MMA outfit rather in Invicta.

If they had, according to Cyborg, her brand would already be much bigger than it currently stands:

Cyborg then detailed the UFC’s lack of – or just outright negative – promotion of her, and it’s impossible to deny she has a decent argument there. Citing YouTube videos where UFC President Dana White likened her to ‘Wanderlei Silva in a dress’ and Joe Rogan‘s infamous post-UFC 193 screwup, Justino noted those two instances were damaging to her image and marketing:

I no lose 10 years. Go to YouTube and type Dana White Cris Cyborg, then type Rogan Cyborg. Tell me if those videos are good marketing 4me https://t.co/Qk5lSW3BJK

A prominent MMA expert soon spoke up in half-defense of Justino when retired combatant and current Octagon announcer Brian Stann appeared on SiriusXM show ‘Toe-2-Toe’ (via MMA Junkie) to state while the UFC probably should have promoted her on a bigger stage than Invicta, she and her manager are notoriously difficult to work with:

“I agree with ‘Cyborg’ in terms of her Invicta (FC) fights. If we (could’ve found) a way to have put her on the undercard or other portions instead of Invicta, maybe that would have been great to build her brand, no doubt. But there are things that she and her manager, who her manager is primarily the one who controls her Twitter account, have to realize here: They are not easy to work with, and I can attest to this.”

“The All-American” described his experience when he tried to set up an interview with Cyborg’s team before her first UFC fight at UFC 198 in 2016. He was reportedly given a sort of runaround by George Lockhart that allowed scant facilitation of Stann’s ability to promote her in a pivotal debuting situation:

“(He said), ‘Bro, she’s sitting right next to me.’ I said, ‘OK, is her phone in her hand?’ He says yes. I go, ‘OK. Does she just no longer want to do this appointment?’ (He said), ‘I guess not, bro. I don’t know what to tell you.’ OK, no problem. But that doesn’t help me promote you. I actually told her manager, look, I understand what’s been said about this woman before – I am only looking to focus on the positive things and promote her as a fighter. I’ve never said anything negative about her, so she didn’t give me that opportunity to do so. OK. Fine.”

Stann then launched into some details about this reported difficulty, remind listeners that while even though she had a nutritionist the UFC paid for, she lied about her weight and also turned down big fights like a featherweight title bout with Germaine de Randamie at UFC 208, making her valid points contrast with the fact that she rarely made matters run smooth:

“The other thing about her. She gets George Lockhart to live with her and be there for her entire camp – cook all of her food. She didn’t pay for that. UFC paid for that. That’s a pretty massive advantage. That’s special treatment. That’s pretty awesome – an entire weight class made for her. She did turn down fights; I know that that did happen. She was hard to work with with them and did turn down fights. More importantly, there was a time where she decided to lie about her weight and talk about her weight cut. For some reason, she started tweeting out her weight at a current time during her cut; the UFC was able to verify and they didn’t really go too public with this, but there were some issues there too where she was lying about her weight at the time.

“I’m not saying she’s 100 percent wrong in some of the things she’s putting out there, but she’s not doing herself any favors on the flip side by being so difficult to work with.”

Cyborg then had a tattle-tale sort of response on social media, noting she hoped longtime matchmaker Sean Shelby would bring up the negative things he said about her during a meeting with UFC owner Ari Emanuel:

But Stann’s perspective wasn’t all negative, as he ended by voicing his hope that her team and the UFC could work the situation out so she could be promoted in a better fashion that truly utilized all of her unique skills and talents as one of the best competitors in the sport:

“I am hoping they can fix this. I’m hoping they can find a way to move this forward and … there’s still time to patch this up and do a better job on both sides of promoting this. But man, in my experience, she is one of the more difficult fighters to work with from my perspective, and it’s a shame because I’ve done nothing but say positive things about her and her training.

“I’ve said it before – people want to associate her with the steroids and things of that nature. I’m telling you, this woman is a phenomenal athlete. It’s a shame she ever got caught up with that early in her career, because she never needed it. I’ve watched her train. I’ve watched her cut the weight. I’ve watched her work out. Wow. It’s impressive. Very impressive, and it’s a shame that conversation can’t be had because of other things, and I think it needs to be had, and I think people will recognize over time, and I’d love to be an analyst that helps usher in that conversation about this athlete. So we’ll see what happens. I wish her and her camp the best in the future, and I hope that this can get healed and she can get promoted better.”