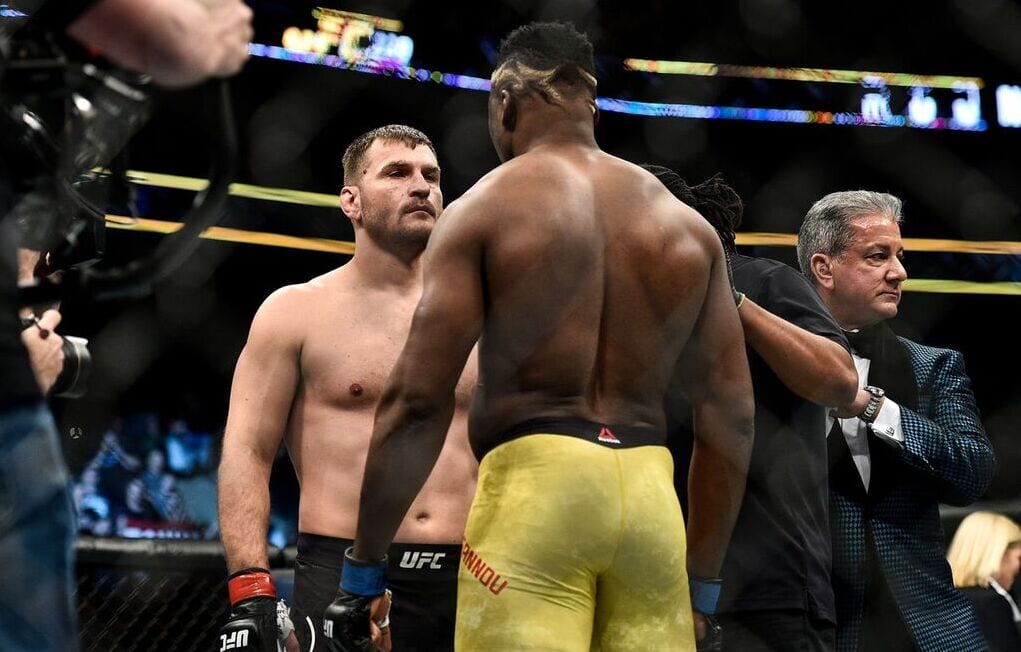 Since his trilogy fight with Stipe Miocic earlier this month at UFC 252, Daniel Cormier has had some time to reflect not only on his career, but the sport as a whole as well. Everyone knows Francis Ngannou is the No. 1 contender for the heavyweight throne, and Cormier believes he beats Miocic should they rematch.

‘DC’ had the following to say earlier today on ESPN MMA:

“”The next time Stipe (Miocic) steps into the octagon, I don’t feel confident he’s gonna win, because all those shots come at a cost. I think Francis (Ngannou) wins the title next time.

“Unless Stipe takes a lot of time off to try to let his mind and his body, his head recover a little bit. Because think about it, Francis hit him with all those shots in January, I hit him in July and he went down, right? He took all the shots from Francis, but then when I hit him in July he went down.

“The last two years I hit him with those same shots and he was able to take ’em because it was a year between fights. So unless he takes a long time, the next time he fights he’s gonna get knocked out, because over the last three years, we’ve done a ton of damage to each other. We fought ten rounds in total.”

The former two-division UFC champion makes a good point, a great point. Luckily for us, Miocic has confirmed that Ngannou is next.

“Ngannou has definitely shown a lot better stuff since the first fight. He’s knocking everyone out in the first round. He’s just on a tear.”

On the other hand, Miocic has also stated that a rematch with Ngannou isn’t exciting to him.

“Francis isn’t exciting to me, already put on a 25 minutes clinic on how to beat him. (I) Want a new challenge! (I) Would love to box.”

With Jon Jones having vacated his UFC Light-Heavyweight Championship to go up to heavyweight, it’s doubtful he’d jump in front of Ngannou, though Jones moving to heavyweight has been talked about for years, and he still has yet to lose a fight.

Ngannou lost his next fight to Derrick Lewis after losing to Miocic because he was gunshy, but he’s won his last four straight, all via knockout, and without a single one of them going past 71 seconds. Perhaps Miocic can give Ngannou his rematch, then welcome Jones to the heavyweight division?

Who do you see winning Stipe Miocic vs. Francis Ngannou II?