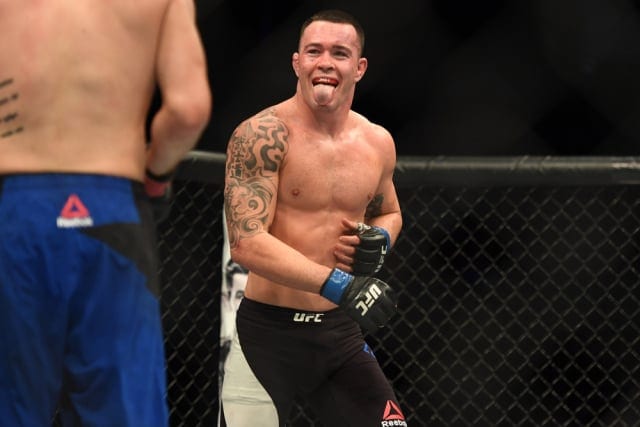 Controversial welterweight Colby Covington has made quite the name for himself both inside and outside of the cage last year, and this year appears to be no different.

Covington has his sights set on welterweight champion Tyron Woodley, and as usual, he won’t hold back while doing so.

The welterweight contender called Woodley out for ‘race-baiting’ and vows to be the champion the people want (via Submission Radio):

“He let’s things get to his emotions. He’s literally a prima donna. That’s the perfect explanation for Tyron Woodley. He tries to racebait. The people that don’t like him and don’t wanna watch him for or think he’s boring, ‘Oh, they’re racist’. That’s his only claim now.

“So, he’s just trapped, he’s in a corner and he’s defeated before anything. The fans have completely gotten in his head and everybody’s under his skin. He doesn’t know how to handle the position he’s in now, but it’s okay, I’m gonna take over his position as welterweight champ and you will see the division be made great again.”

Covington (13-1) most recently defeated Demian Maia in October and has kept his name in the press ever since. Meanwhile, Woodley himself beat Maia at UFC 214 and is due for a title defense after recovering from shoulder surgery for the torn labrum he suffered in the fight.

However, Covington will have to navigate his way around fellow contenders Rafael Dos Anjos, Santiago Ponzinibbio, and Darren Till in order to get a fight with the champion, and he may just have to face off with surging contender Kamaru Usman before he fights any of them.

Who would you like to see Woodley defend his belt against next? Should Covington be the next fighter in line for a shot?