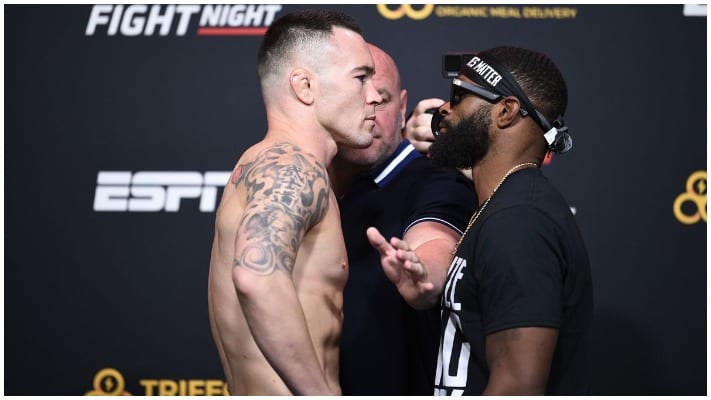 IT’S TIME! The UFC Vegas 11 main event is finally upon us! Colby Covington takes on former UFC welterweight champion Tyron Woodley in one of the biggest grudge matches of 2020. Who’ll walk away with bragging rights? Let’s find out…

Round 1: Tyron Woodley surprisingly pushing forward at the start of round one. Colby Covington throws a big overhand right to let him know not to rush in too quickly. Both men exchange leg kicks. ‘Chaos’ shoots in for a takedown and gets it. He’s the guard and has Woodley pressed up against the cage. ‘The Chosen One’ slowly works up to his feet – great work. Covington is now the one pushing forward but with respect for the power, his opponent possesses. Woodley wings a big right hand to the body. Covington gets him back with a big kick to the midsection. Covington closes the distance and scores with another big right hand – the most significant shot of the fight. He presses the fight up against the cage and is controlling Woodley now. Covington lands two big elbows on the break. He continues to press forward and lands another left hand. They clinch again against the cage. Woodley seems to have picked up where he left off against Gilbert Burns – back against the fence and hesitant to throw as the horn sounds to end round one.

Round 2: Woodley again starts the round fairly aggressive but misses wildly. Covington quickly turns the tables but eats a heavy leg kick on his way in. ‘Chaos’ tries to close the distance with a flying knee attempt. He uses it to clinch up against the fence. Woodley does well to separate but the Colby gameplan doesn’t change – he continues to push forward. ‘T-Wood’ lands a takedown and tries to lock up the choke. He holds onto it for a while before surrendering the position against the fence. They break again. Covington continues to push forward and is just touching Woodley. The former champ shoots again but doesn’t fully commit and ends up stuck in the clinch again. Woodley threatens with the power but ‘Chaos’ retreats before hitting a huge body kick. Big right hand from Covington. Woodley seems to stumble but first back with a nice shot of his own. He comes forward and lands another as round two ends.

Round 3: Covington advances at the start of round three. A couple of strikes upstairs and a knee stomp. An eye-poke from ‘Chaos’ on Woodley brings a halt to the action. He seems to be struggling and they have called in the doctor to take a look at it. Eventually, he manages to recoup and we are back underway. Covington lands a sharp body kick up the middle. Woodley steams forward with a right hand but Covington dips under it and lands something of his own. Woodley is getting aggressive now, perhaps motivated by the eye poke. Covington clinches up and shuts it down. The fight is up against the fence. Colby is tapping the body before firing a knee to the stomach of Woodley who quickly lands one of his own. The referee asks for more action and ‘Chaos’ unleashes an inside elbow. Woodley momentarily reverses the position but isn’t able to maintain. Covington is attacking the knee of Woodley with his knee. Not a lot is happening right now. Covington is landing just about enough to keep the position. They separate and Covington lands a two-punch combo on the break just before the buzzer sounds.

Round 4: Covington opens up with a high kick that sneaks through. He’s once again backing his opponent against the fence. Woodley fires off a nice body kick to try to stop his opponents forward momentum. It fails. Covington dips down for the legs. Woodley grabs the neck to stop the takedown. He’s threatening with the choke but it’s not in. He lets go and Colby quickly completes the takedown. Covington is dropping some nice ground and pound. Woodley pushes him back to the guard. Covington lands an elbow before continuing to land lots of volume. Woodley’s eye is all bloodied up from that elbow. Covington is tapping Woodley four times then nailing him with the fifth shot. ‘Chaos’ never stops with his output. Woodley is struggling to see – blood seems to be flowing into both his eyes. Covington continues to land. Woodley covers up as the round ends.

Round 5: Covington shows no signs of slowing down. At the start of round five, he pushes forward putting the pressure on the former champ who needs a knockout at this point. Colby shoots in for a takedown. He lifts Woodley up high. Gets the takedown. He’s caught in a choke which looks quite tight for a moment before he pops out of it. Woodley is crying in pain. The referee waves off the fight. It’s not clear what has happened. Look’s like a rib injury from trying to squeeze for that choke.